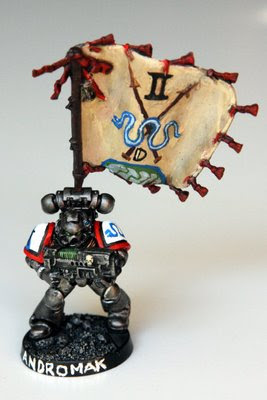 Last week an anonymous reader commented on an Iron Snakes Post I did last year. Click here for the link to that article. I had modeled an Plasma gun on one of the character models, just like it said in the book. The anonymous reader thought it should be a plasma cannon ... and he was right! To find out I sent Dan Abnett an email and he was so kind to respond promptly:

"You'll have to forgive me for being an artsy-fartsy writer guy who occasionally lets prose get in the way of hard facts. I'm pretty sure we're talking about a cannon here. In terms of this story and others, I am prone to using the word gun simply to denote a weapon that shoots things rather than a specific TYPE of weapon that shoots things. It's not laziness, it's just a desire to soften the edges of the prose so it doesn't read like ultra-specific rule illustration (Not that using the word 'cannon' necessarily would, it's just that this is an example of a general trend of mine). Sorry for any confusion."
Dan Abnett
So that takes care of that: I will rebuild Brother Andromak (just for the hell of it) and in the mean time I am happy to know that one of my favorite writers takes time to respond to questions like this. Thanks Dan and maybe you can think of another Snakes story one of these days..
Mike
Posted by SC Mike at 12:52 PM