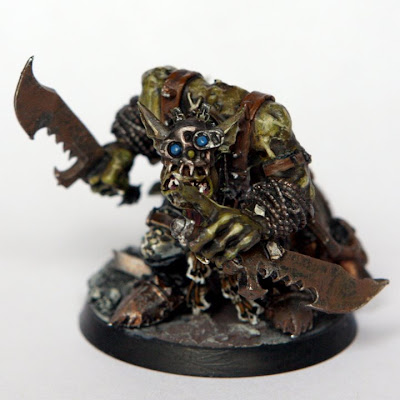 When I saw Snikrot, GW's new release I was instantly impressed. This model is absolutely beautiful, terrifying and grotesque, all at the same time. Snikrot lacks the usual Orkiness that radiates stupidity and clumsiness. Instead he looks focused and brutal and absolutely professional. I would not want to be in the same bar with him. Besides, his stats in the game are outrageous. The sculptor is Seb Perbet who also gave us the the ShokAttackGun. This guy is an excellent artist and Snikrot is my favorite Ork sculpt to date.
Enough praise, let's get down to business. For the first time I tried to yellow up the Ork Skin and follow the paint scheme of GW illustrator John Blanche. I tried to think of Orks as spores in a big swamp and thus wanted a more realistic, dirtier look to the model. I started out with Camo Green, followed by a wash Devlan Mud. A highlight of Camo Green over that, followed by consecutive highlights of Rotting flesh and Bleach Bone. After that two washes of Sepia to tone it all down a bit. I like this new color scheme, it's less cartoony then the usual Dark Green/Snot Green/Scorpion Green, more real but also more scary. 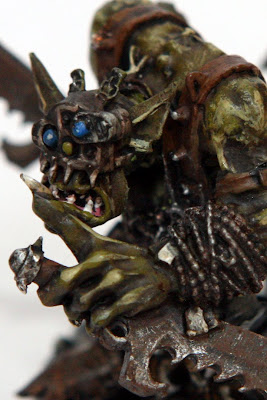 Interestingly, although Snikrot carries a huge backpack, Seb Perbet sculpted the back without the usual hole for attachment. I liked that, his spine, muscles and belt all look very nice and I decided against putting the pack on him. Instead I gave him a helper to handle it. View it as Snikrot just climbed down and told this grot to keep an eye on his backpack while he does his business. It took me a while to figure out the placement of it all, wanting to not have the grot take center stage but also leave enough room to see paint details on Snikrots back. 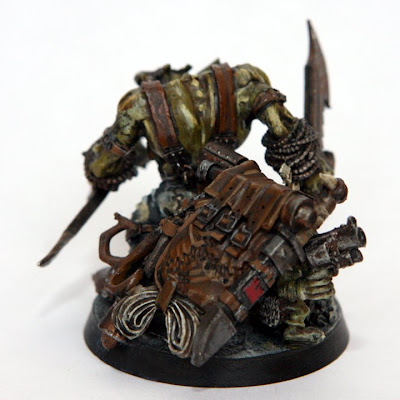 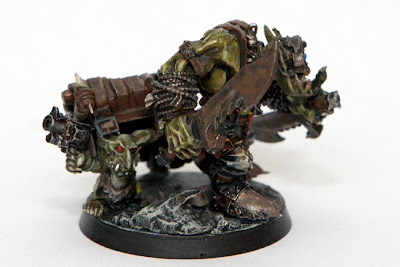 Snikrots blades have 6 layers on them, it took me a long time to get them just right, starting with Boltgun etc. Washing and using brown foundation paint, mixed with baking soda. In the end, the look old and rusty but still very deadly. 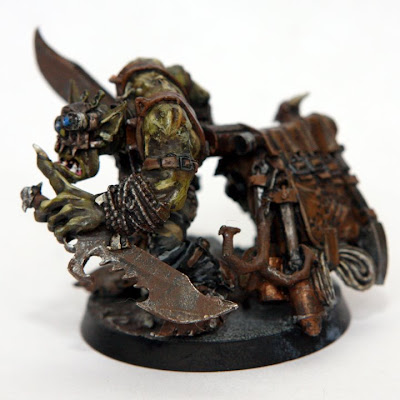 I did a minimal paint scheme on the base, using a mixture of rocks and baking soda for the texture. 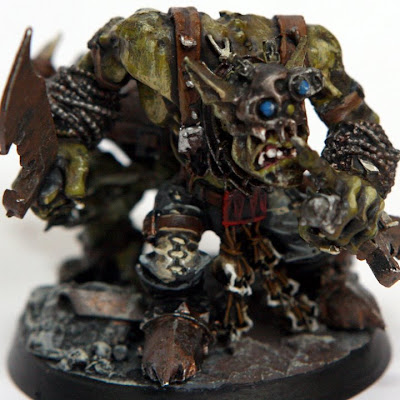 All in all, a pretty somber looking model. I think it fits him to the tee.
Mike
Posted by SC Mike at 11:23 PM

Email ThisBlogThis!Share to TwitterShare to FacebookShare to Pinterest
Labels: orks