I have a habit.
I just started another army.

I don't mean I have a 40k army and I am starting a Fantasy army.

I mean I sometimes open a box a find an army that I forgot I had, and I still went ahead and decided that I would give Space Orks a go, and I have not yet got rid of any of the armies that I told my friends I was going to sell.

Heres the start of my own Ork Waaagh from two used lots that I got a great deal on online. 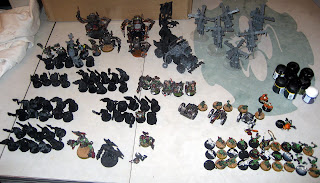 I don't drink or smoke. No drugs, no Coffee. No nasty internet porn habit and I have no debt.
It is Saturday night, I have a girlfriend and no kids and I am painting Squigs, and blogging about it.
I have more than 40 Codex / army books, some are doubles and many are for armies that I do not play.
I have Fantasy armies;
Dwarf
Orc and Goblin
Wood Elf
Ogre
Chaos Warriors
Chaos Daemons
Lizardman
I have 40K armies;
Chaos Space Marine
Eldar
Tyranid
Tau
and a GIANT Dark Angels army with a big Ravenwing detachment.
I decided to model the entire Deathwing so I went about finding 100 terminator models, now I have way more than the 100 I needed, which is more than the real chapter has.
A few of the armies I own, I have no interest in playing.
My Wood Elf and Ogre Kingdoms army boxes are still unopened, but I would like to play them.
I bought the Ogre army set to use as Chaos Ogres, because I think the older Chaos Orges look kind of silly, but I liked the models so much, I decided I would just have a small Ogre army too.
So when is enough too much?
I have accepted that I will most likely not paint all my miniatures in my lifetime.
But Mike, I promise I will paint my Forge World Giant.
I remember when I first met Mike I talked with him about a socialist approach at Warhammer, having a bunch of cool armies and a great game table so that I could have armys to loan friends that wanted to play a game, I think I am somehow working with that fantasy in the back of my head somewhere.
I catch myself daydreaming about opening a gaming club, so I can paint figures and play games all day instead of having a real job.
perhaps if I build it they will come.
While listing my armies for this blog, I realised that I do not have a army with skeletons, and I have always wanted to have a skeleton army, I think I will start a Vampire Counts Army but use Tomb Kings horses as Blood nights or something.
Am I broken?
Well, here are the Squigs, painting them makes me happy so they must be alright. 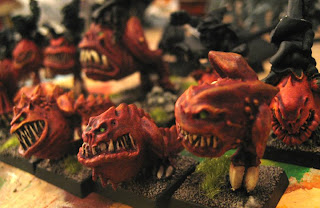 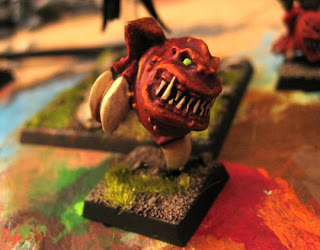 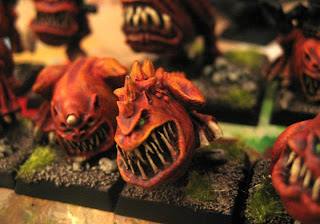 I will paint the Gobbo riders soon, I used a dark red base , highlighted with orange and then yellow, with a heavy red wash thin yellow highlights again and then red wash again. Teeth and claws are bone white with a Ogryn flesh wash and then highlighted with bone white again. Eyes are scorpion green.
I have promised myself to keep up with basing and these were based with sand mix with tiny pebbles, primered black, painted dark brown ,highlighted med brown, highlighted bone white, and afew white details on some of the stones, then random clumps of bright green static grass.
Since I am talking about bases, I did this one at the same time for my Lizardman Lord Kroak.
It is about the same but with a bit of yellows and greens in the sand highlights, and about 4 different types of grass and more large rocks from the basing kit highlighted up to a white. 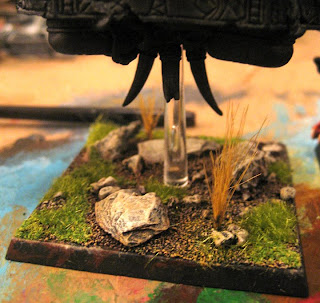 Well that's my wild and crazy Saturday night, if you suffer like I do, please let me know that I am not alone.
Is there a 12 step program for Warhammer?
John
P.S. its not all my fault,
I try to moderate, but some of the local game shops have it in for me,
things like 30% off of an Ogre army box set ( a whole army for $20 more than a 4 man box set) and with the saver card I get a punch for every $10 I spend , with enough punches I get 15% off everything I buy.
Or how about I go to check out the new lizardman stuff and they have an old Lord Kroak from years ago that is still on the shelf priced at $30, because it was priced back when they first came out a million years ago, I go to ring it up and its a further 30% off because its been sitting there for ever, the same exact model is in the new book.
I have been thinking about the new Eternity Warden, but its Direct order only, but guess what? This shop orders a few direct and has them in stock.
I even got the new stegadon plastic kit for $19.99 because they used it as the display to show what the sprues looked like and it didn't have the box top.
But.....you will see more of him later.
Posted by SC John at 12:22 AM

Email ThisBlogThis!Share to TwitterShare to FacebookShare to Pinterest
Labels: fantasy