The Stegadon to Nurgle Dragon Conversion

As you may know, I recently participated in the Stegadon Conversion Challenge hosted by Dave Taylor and Jeff Hall, you can link to it here.
The basic idea was to build something with the new Stegadon kit, converting it to use in a different army.
It was a great honor to be invited to participate and I think everyone did a great job, and the vote was very close.
Since part of the contest was to show the models and not give the names of the builders, I was unable to show the details of the build until the voting was over and now it is.
So here is my entry, a Nurgle Dragon converted from the new Stegadon plastic model kit. 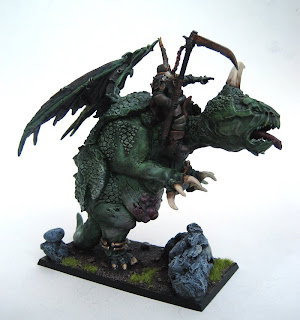 I wanted to make something that I could use in one of my armies, and I didn't have a Dragon yet for my Chaos Nurgle army.
I started by assembling a few things to get the body mass together, the rear haunches looked big and strong so I decided I would reverse the model to give it massive shoulders like a rhino, so I placed the head at the end of the tail to give it a neck, I wanted a place for a rider to sit. I also decided to have it standing on its rear legs sort of rearing up to give if a more dynamic pose. 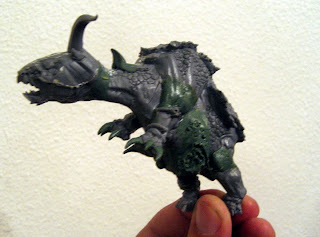 I added wings from a daemon that were a bit short, so I lengthened them with some greenstuff. I also used greenstuff to make the legs longer, I tacked the stubby feet where I wanted them and filled in the rest with greenstuff, I also used it to make a belly and wounds and poxes, also to make the claws. 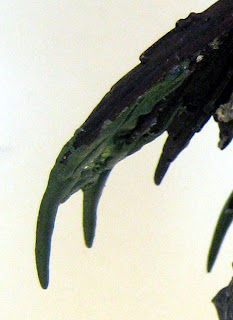 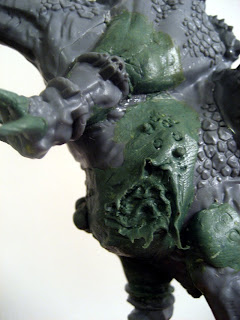 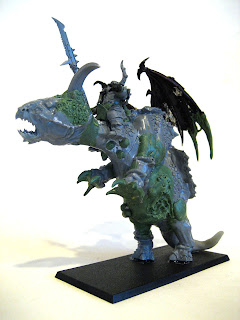 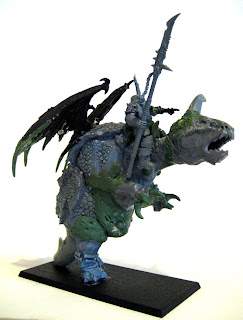 The tail is modeled in Epoxie Sculpt, the tongue is a spawn tentacle.
The rider is from the new Chaos knights with a few mods to Nurgle him up and pose him, I added a scythe/reaper blade from the plastic zombies set.
Painted with greens and lots of washes in browns, greens, purples and reds.
I based it on the original base which is the correct size for a dragon, and built up a low stone wall out of pebbles from the yard to make a bit of ruins, and I added sand mix and some static grass. 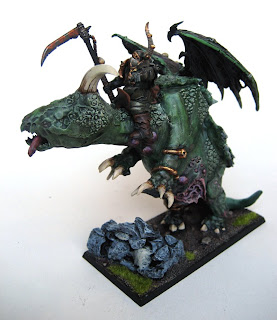 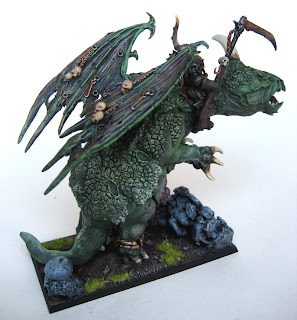 It was a bit difficult to bring myself to cut up this model, but once I commited myself to it, and started glueing stuff together, things seemed to fall into place.
I have to say it is kind of hard to put all this work into something and then put it out there for the world to judge ( some people can be hard to please ) but I think it makes me a better model builder, after finishing this and looking at it, I was surprised how well it worked out, and by how well it was received, especially in the company of the other fine builds.
I would like to say thanks to my blog partner Mike for helping me with great ideas, a super positive attitude and for his unwaivering support, and my girlfriend for putting up with the mess I make with Warhammer stuff all over our house, and not giving me too hard of a time for working on my models and ignoring her, and also to the many blog readers that have responded with comments and support, letting us know that someones is out there reading this stuff.
John
Posted by SC John at 12:52 PM