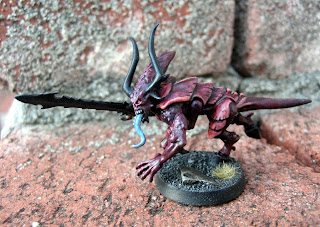 Just a bit of a post showing my entry for the Bay Hammer "Chaos Tyranid " contest. 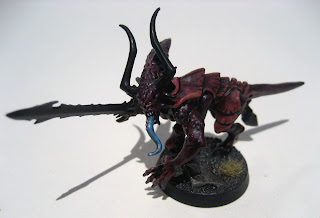 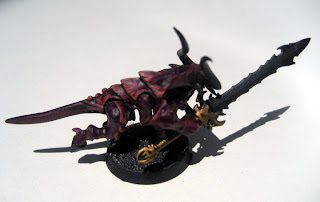 I made him from a bloodletter and a gaunt, I recycled him from some built and painted models that were in some lots that I picked up recently.
I know that Chaos has no effect on Nids, but I wanted to enter the contest.
I have been picking up some great deals on lots of warhammer stuff off Craigslist. You should keep an eye on it in your area and score some goodies, unless of course you live near me, then it sucks and you would hate it, so don't try it.
I got some Necron in a pile of stuff, and my housemate has taken an interest in them.
I actually got a game in for Christian's birthday Sunday, I played 1000pts of Nurgle Deathguard, and they did great vs Orks. I need to practice with them, as I want to enter them in a tournament perhaps at Pacificon.
I also made the rounds in the area and picked up some great bits for some future projects.
John
Posted by SC John at 12:06 AM

Email ThisBlogThis!Share to TwitterShare to FacebookShare to Pinterest
Labels: Chaos