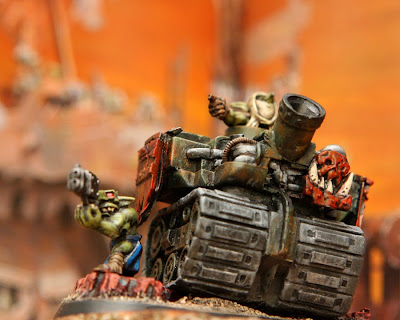 I read this great post in the beginning of the year: Click first, then come right back for the story:
HERE
Let's start with that post for a long time ago, the one post I couldn't forget. I think Jeff Hall from the Adepts Forge had a great idea; one of these conversions where you start wondering why GW didn't come up with that. The model has so much going for it: funny, easy to convert, much more in line with 40K and the maneuverability of the Ork armies then the old, civil war style cannons.
But making a bunch of those would be hard. Unlike Jeff Hall, I don't have that many bitz laying around to build them. Besides; I love finding (cheap) models from different games to incorporate in our hobby. So here a $9.95 dollar RESIN model from ArmorCast. They call it a Patrol Steamer, here's the link to that little tank. It was the tank I was always looking for. 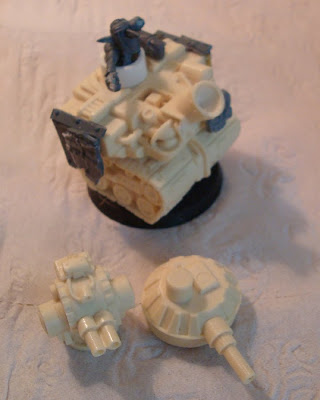 It's a cute little tank but for my purposes I ignored the two turrets it comes with and actually made the back of the tank the front, using the exhaust as a kannon. (These extra turrets will come in handy later on I'm sure).
Then I added my own turret, using a piece of plastic tubing. The rest was easy, like always process of thinking out the design is way harder then the conversion itself. 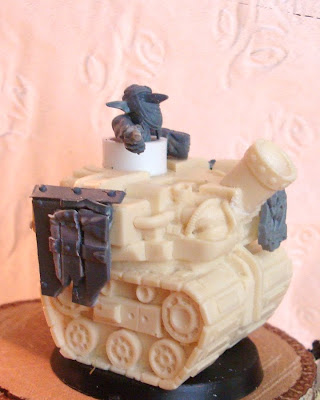 The side plates are those gold ones from the old basing set and I used some old glyphs here and there. 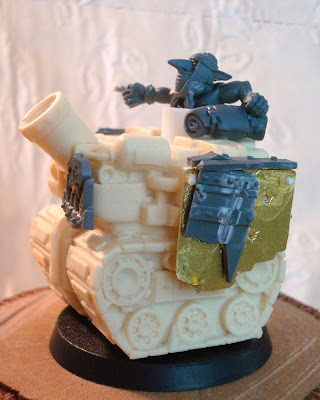 Here's the painted version, simple and straightforward. I used a bike base because I had to add an extra grot since each big gunz team has two grots. 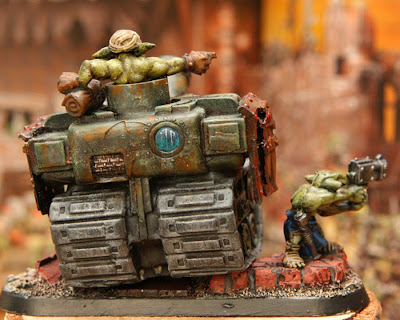 You already know where this idea could take you, three little tanks with magnetized lasgunz OR lobbas OR kannons.
The base is from DarkArts Miniatures 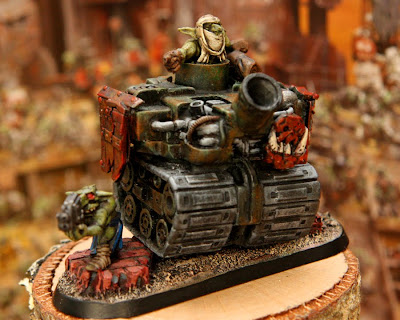 This was the 3rd and last part of my little series about using non GW models. Here's part 1, here's part 2.
Enjoy and do check out Jeff Hall's conversions. This Ork Skorcha conversion is great.
Posted by SC Mike at 11:40 PM