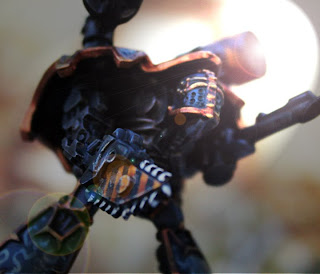 I started with all this Warhammer nonsense in the mid 80s.
High School, new wave, Ska, skate boarding, acne, girls and Warhammer.
I have mentioned those days a bit here. 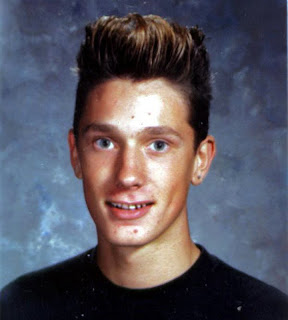 Yeah, that's me, about 16 I think.
I didn't play the game, but I was buying and painting the figures.
In 1988 I played my first real Warhammer game; Adeptus Titanicus. While not Warhammer, it was from the Warhammer universe, and I finally got to use minis in a GW tabletop game, and it was fun.
I played that game with two guys named Christian.
21 years later, I am happy to say that I played my most recent 40k game against one of the same guys.
I never played Adeptus Titanicus again, or even painted any of the models, so today, a little bits box justice.
I found this plastic Beetle style MkI Warlord Titan from Adeptus Titanicus, in bad shape in the bits box.
I have ignored this guy and he has been knocking around and getting pushed aside while searching for just the right little thing for whatever conversion I was working on.
I figured it was time to renew this poor old veteran, so I gave it a Simple Green bath to strip it, magnetized the weapons and painted it up. 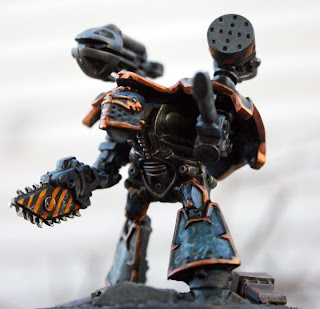 Shot from this low angle, like this, these look massive, but they are actually quite small.
I decided to break up the large flat areas with some muted wavy lines, an idea I remembered from a WWII German night fighter. 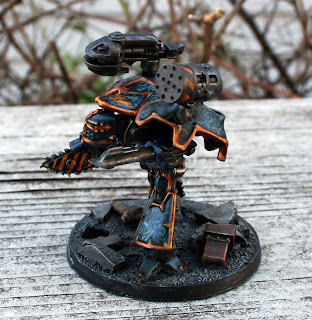 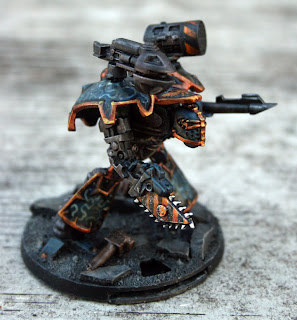 I like the way the weathered hazard stripes on the chainfist & rocket launcher turned out.
If you get a chance, pick up an older model that you remember from the good old days, and give it a good build up and paint job that it deserves.
John
Posted by SC John at 5:20 PM