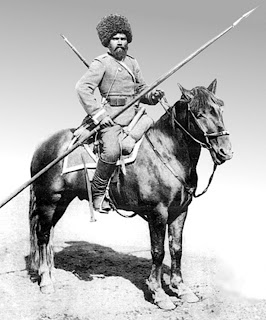 I recently got a good deal on a nice Vostroyan force and I thought the ancient look of these miniatures would lend themselves well to cavalry.
After the good amount of modeling to my last Rough Rider for the Ardwick 23rd, I wanted to try building a model requiring very little modeling work and using all GW parts.
I considered using a bear or the Mechanical Empire horse ( I might still use it as a counts as Mogul Kamir on cyber-steed) but decided to go simple.
I found an old Atillan Rough Rider blister for $8 at the local game store. It had all the essential parts; lance, rider legs and a horse, but I don't like the Genghis Khan look.
I trimmed off the fur and peak of the hat and made the Vostroyan Bearskin /Cossack hat of greenstuff using the device shaved from a lasrifle as the cap badge.
I decided the Cavalry would have unique uniforms and that I would not try to make him look exactly like a Vostroyan foot soldier.
The pistol was huge and goofy looking, not fine enough of a weapon for a Vostroyan , so I crafted a new pistol using a musket body with an added scope and lasrifle tip.
I also added a canteen and saddle bags and a bedroll from a space marine bike. 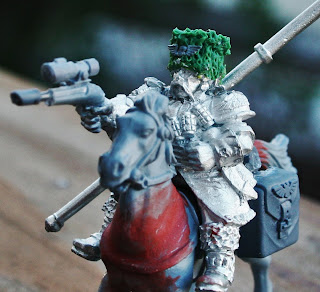 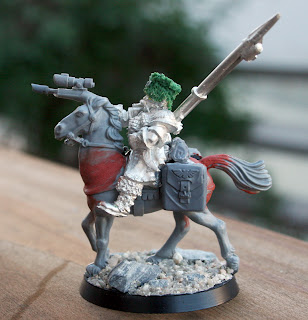 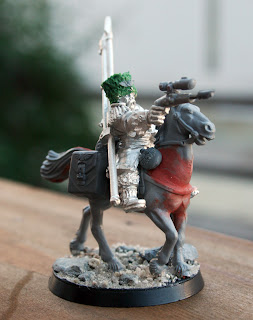 This conversion was very simple and I hope some of you will give it a try.
Check out the finished and painted model here.
John
Posted by SC John at 1:31 PM