One of the sort of local game stores, and one of my favorites, the Game Kastle, had a Gamers swap meet, and I signed up for a table.
I loaded up the car with old minis and games and drove over to claim my table.
A great turnout of sellers and shoppers, with the sale lasting from 10 til 3, and great weather too. I saw lots of OOP warhammer stuff and other interesting minis.
I didn't do much shopping, but I did grab a couple of Necromunda minis for Mike and some Savage orks, a river troll, cowboys and German Tiger, Panther and Pak guns, all for next to nothing, and I sold a bunch of stuff I didn't need too.
It was great to meet lots of gamers from the area, and see what everyone was playing. I also gave out a few tubs of Super Secret Sand, and talked to a bunch of people about the blog. 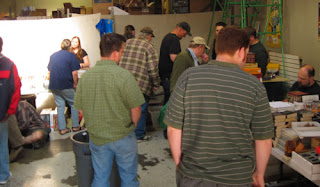 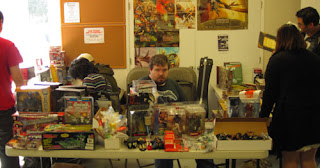 I traded some stuff for some store credit, so after I packed up, I had a look around to spend my gift card. I grabbed an Albatross, a big box of plastic cacti and a pack of mounted /dismounted cowboys.
Good times were had by all and I am looking forward to the next Swap.
John
Posted by SC John at 3:54 AM

Email ThisBlogThis!Share to TwitterShare to FacebookShare to Pinterest
Labels: Warhammer on a budget