Wandering Off the Path a Bit 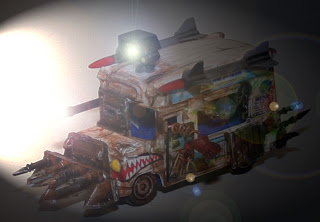 Well, I have been working on lots of Warhammer stuff and have also been goofing of with some other games.
Mike and I have been playing quite a lot of Wings of War, with the WWI planes, and it is great fun and very simple, and the games move very fast. We have played with up to four planes per side and now have some two seaters also. 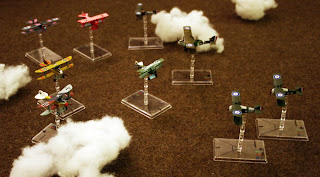 On a recent trip to the hobby shop for more planes, I noticed another game called "Wreckage" that uses a card system and I thought it would be fun to make minis for it and covert it to a miniatures game.
The game play is similar to Wings of War but uses cars in a battle arena.
The car cards are about the same size as a Matchbox or Hot Wheels toy car so I bought the game box and went to the toy store and picked up some cars to convert. I forgot how inexpensive these cars are, less than $1.
When was the last time you spent a dollar on a mini? Also, you only need one car each to play the game.
After going through the rules, there are a few things I think that I would like to change, but we will see how things go after the first game. There are also lots of markers in the game, so it will be fun to make up some barricades, wrecked and burnt up cars and fuel cans, to replace the cards in the game and also a table top arena.
A whole new game with lots to model, and all for less than a new codex.
Here is my first mini, based on a Matchbox Ice Cream Van. I call it "Cold Steel" 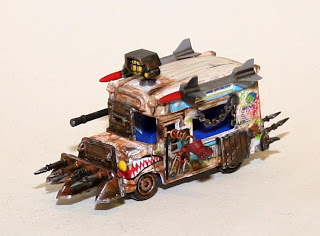 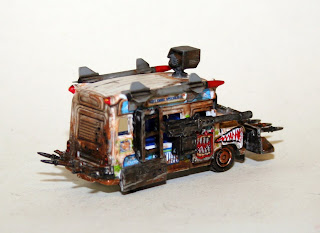 Email ThisBlogThis!Share to TwitterShare to FacebookShare to Pinterest
Labels: wings of war, wreckage