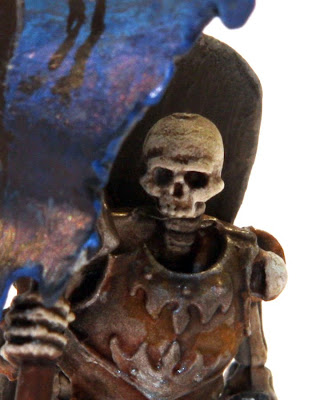 Painting skeletons is easy, BUT giving it your own character is hard. There are so many great paint jobs out there, many with reds, blacks or purples. I was struggling for a while what color to give the robes of these undead knights, who lived so long ago. Then my wife suggested painting their clothes white, based on the barrow wights in The Fellowship of the Ring. I tried a model and it turned out to be a great idea. 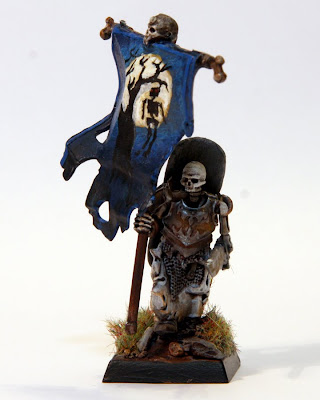 The white makes them timeless and creepy, just what I wanted. Also, I didn't go totally white, leaving that for the skeleton itself. So now there is a nice color gradation from white to beige to brown, the muddy ground that he is walking on. I painted the rest of the model modestly, with the armour being old, faded and a bit rusty. i think I will add some weathering powders when all of them are done..
The shield on his back is from a Warfactory Keltic sprue that I received in another wonderful Barter Bucket trade with Daniel from Singapore! I just added the head. 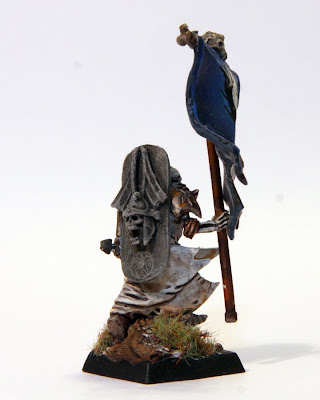 I worked for a while on the banner and it is as good as I can do it while still having fun with it. 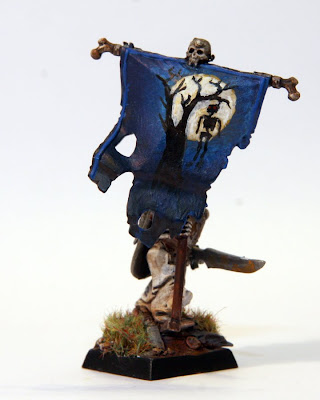 Anyone with suggestions, before I paint up the other nine?
Mike
Posted by SC Mike at 8:40 AM