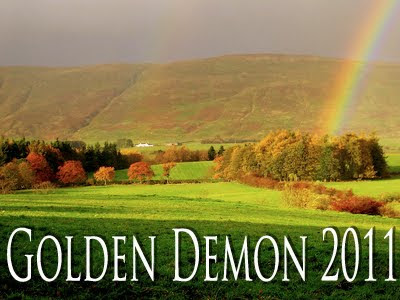 Well, what a difference a few weeks can make. Still on a high from John stories from Baltmore 2010, I started out planning the roadmap to Chicago 2011 and trying to make it through the first cut at Golden Demon there. I started out happily (here), but now, being swamped with work and frustrated at slow results, I am doubting it...already.
Here's the model, I finished it up (not the base) as a test model but it took will power to not toss it in the garbage. 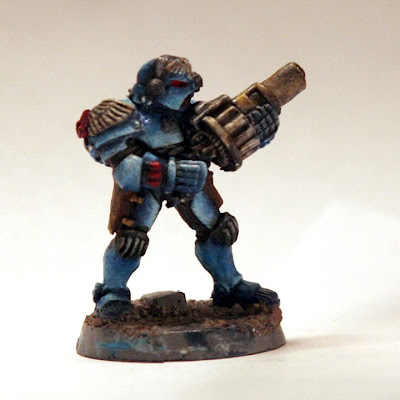 Obviously the range goes from enchanted blue through white with blue and black washes for shading. I tried to make red the 3 point spot color. I tried shading the kneepads which actually worked out allright, the photo doesn't show that. 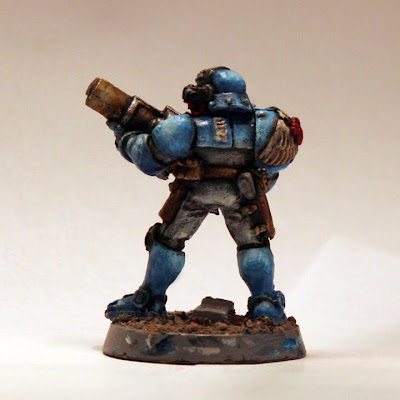 OK, here were my problems. Maybe all of you have tips or similar experiences:
1. my white primer is kind of grainy. right from the start if you look close, it looks unsmooth and after I had primed it there was not much to do about it. Should I gloss coat it first? use a specific one?
2. my paints are older and really dry. I bought slowing medium but it still started to look like drybrushing really soon after I applied the paint.
3. I have a lot of problems analyzing the next shade of color and density, esspecially after I start on the model the next day and I have to remix the paint to try to get to the shade where I left off. I messed up my previous work multiple times because I misjudged the shade of color and instead of blending lighter, it was actually darker or vice versa.
4. if I add too much water, like they say in the White Dwarf, it suddenly takes over the entire surface, I panic and wipe all of it off with my hands...
5. I wonder if plastic is easier to paint on then metal, it doesn't seem that smooth of a surface.
On this guy I didn't really keep a coherent lighting effect, I just played around with different effects. In that respect, the helmet came out allright. 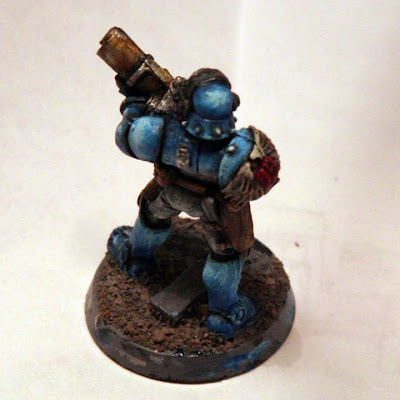 For my Hordes of Vormon I am painting the winged vampire and while this model is too difficult for me yet to really do a good job on, the wing is manageable and I will practice more blending on that part, here's the basecoat on that part. 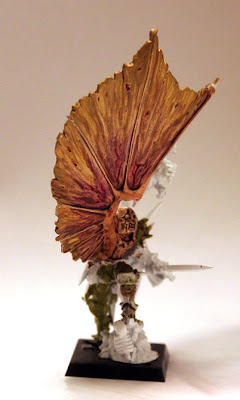 It's snakebite leather with Devlan Mud and the purple and red washes for some accents. Now I will work my way up to bleached bone. 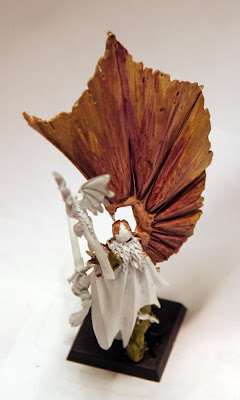 Sorry for the whining.
Mike
Posted by SC Mike at 11:14 AM