Quite a while ago I decided I would like to play Deathwing, I started collecting Terminators to do so, now I own more Terminator models that the actual Deathwing.
I started painting a Land Raider Crusader, but was having trouble with the light color and it was shelved for other projects.
I got to see Ron's Deathwing army at Games Day this year and wished I had done more with mine. I am pretty much finished with my Death Guard army, so I decided to get back to work on the Deathwing.
I went online and searched for some good Deathwing tactics and list ideas and decided to make a list and build it up, so I could get some games in with them.
I found so much great stuff here on WarSeer. These guys are hard core and have worked very hard with the limited list items available and figured out some great tactics for this outdated and broken army.
I will be trying a list with two Land Raider Crusaders, Belail, a termie chaplain, an assault squad and two shooty squads.
I am rebuilding all my models and rearming them, also removing mold lines and drilling barrels, and updating the paint.. I have also decided to use resin bases and to pin the models.
I will use some of these in mixed Dark Angels armies and I wanted them to be taller and more massive looking, so I went looking for resin bases with some height.
I like to use slate for my normal basing on most of my stuff, so I decided to go with some slate style resin bases from the local game store. I picked up 15 40mm "Highland Crag" bases by Forgecraft Games for my termie troops.
I could have made my own with big slate chunks but I would have had to drill through a bunch of rock for the pining and I had a lot to do so I was happy to find the resin as it is easy to drill.
I also bought a pair of more fancy "Shale" bases made by Micro Arts Studio for the two heroes. I want these guys to stand out but still fit in, the overhang of the stones on the bases is unique to these two and they are a little taller still than the rest of the boys.
Here you can see some of the minis being re based, with the heroes on their fancy bases. In the background you can see some of the Crusader being worked on. 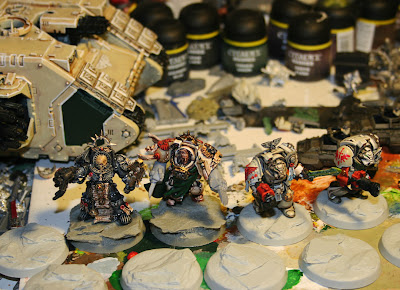 I plan on doing a few simple mods to the Raider, it will have green inserts as you can see in the pic. The second Crusader will be the opposite and will also see double duty with the Dark Angels.
I have been test driving a new Raphael fancy paintbrush from Secret Weapon ( thanks Ron and Justin ) instead of my Windsor & Newton to try it out and I have also been using Vallejo paints, and I am enjoying both.
You may have noticed fewer posts from me recently, I have been working more than normal and also using much of my spare time to fix up my new toy. 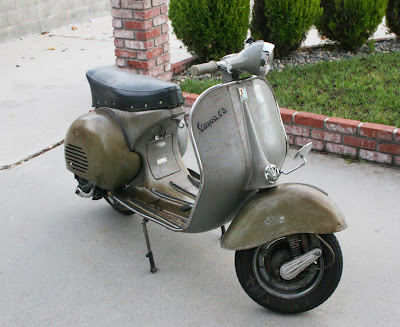 I have had Vespas since I could drive in high school, but have always wanted this one which has eluded me until now, this is now my all original, unmessed with 1960 Vespa GS 150.
While it may not seem like much, to me it's like being in high school again, but being the cool new guy in school and dating the Prom Queen.
Who says you can't go back in time?
I really used to stay up at nights thinking about owning one of these.
It's funny what makes us happy.
More Warhammer updates to come.
John
Posted by SC John at 11:14 PM