I asked the local gamestore in Santa Cruz, Game A Lot, if I could paint up their store model of the new Grey Knight Nemesis Dreadknight. Ross, the GW manager there, kindly handed me the model, built and primed, and gave me as much time as I wanted. Well, it took me a little over a week to get it done and I have to say, it was really fun to paint. Here he is: 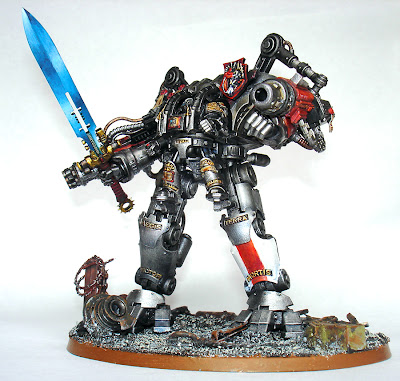 I actually bought Tamiya Dark Gun Metal spray paint and gave it a good coat. After that I washed everything with black multiple times, except the front armour. That stayed nice and light. 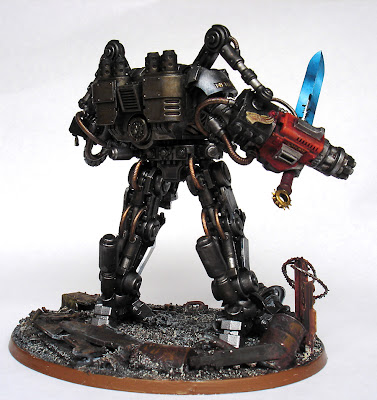 The guns were great to work on but Ross also added a Sword, not legit, but it does show off the range of options on the model, and I really went to town on that thing. I must have spent two hours solid on just the blending on the sword. I started out making marks of the extremes of the two colors, blue and white, and then worked my way from dark to light. It takes time and stamina, but well worth it.

After that I added the rubble base and dropped it off at the store, where it hopefully will attract sales for the Grey Knight models. 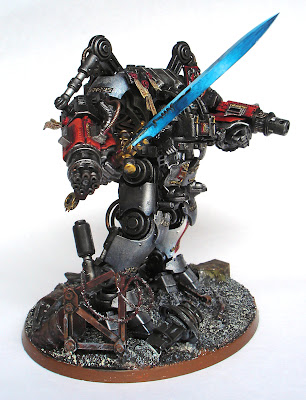 One thing Ross did was nifty: he added a metal pin to the sword hand which makes it really easy to take it off or put in on. A different way than using magnets. 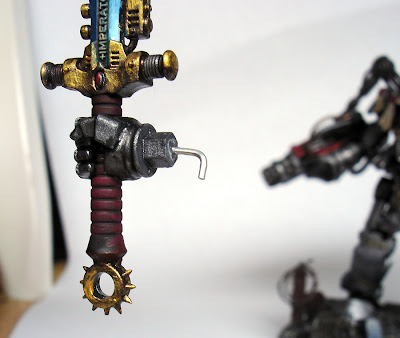 I dropped him also on Cool Mini or Not, where he will be tomorrow. More about CMON this week!