Besides the four armies that we are giving away for the Heroes of Armageddon Charity drive, there are also a host of extras included. One of those extras are custom dice, made by Chessex. We asked if they wanted to help and they happily obliged. Look out for this logo, it's a great company.

And as finished dice 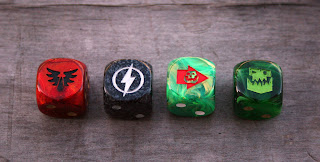 Chessex was our first sponsor last year with the Storm Wardens Project, and we are happy to have them back doing custom dice for all four armies. 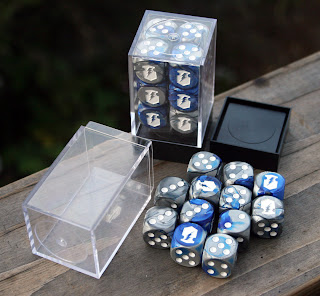 I have had custom dice made for both of my finished armies, they are a great way to finish your army off, just provide a logo and choose a color, Chessex will do a great job and all for an amazing low price, so don't embarrass yourself dumping out a bag of miss matched whatever dice when you can design your own to match your army. 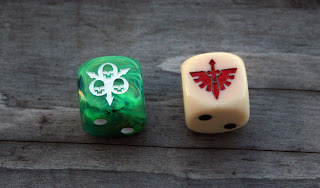 You can get some custom dice of your own by winning one of the four armies we are raffling off, or just head over to Chessex and have them whip you up a set for your own army. Be sure to tell them we sent you, and that you appreciate them supporting the Heroes of Armageddon Project. And keep the donations coming.

Email ThisBlogThis!Share to TwitterShare to FacebookShare to Pinterest
Labels: Heroes of Armageddon