Thoughts
Let me start by saying that I am a complete and utter modeling butterfly. I get very excited about new models very quickly and it is becoming an obsession to get the models once I have convinced myself that I have to build and paint them. Here's a list of current obsessions with test models done on two armies:
-Spacewolves (5models completed)
-Dark Eldar (testmodel done, coming up)
-Historical modeling in 28mm (test diorama done, coming up next week)
-Tau (built and kitbashed one Forgeworld model, but that's it!)

Two armies have had a REAL grip on me over many years: the Bishkek 2nd Guard Army and the Hordes of Vormond Vampire Counts, both of them nearing completion.

And now the Ogres. I think that I am one of many who were blown away by the new models. They look great, they really did a very artful and succesful design job. Slowly my little voice started saying Ogres...Ogres
4 weeks later I have the new codex, a new box of Bulls traded with Ross from Roaring Bolter and a bag of scrappy but perfectly usable ones that John found in his collection. Since that day (Friday) I have not been able to stop thinking about them. I know I can't stop it and I am giving in, fully.

Shock
I was there when the UPS driver brought the box with all the new models into the local gamestore...besides the codex I picked up the extra set of magic cards. I had kind of given in already I would have to get one more thing, but didn't know what. Peeking at the pricelist, I paled. I asked about the 38 dollars for one model, surely that must be a mistake? But no, all the characters and heroes are 38 dollars a piece. How about the new boxed units? 40 dollars plus...The maneaters were still 24 but those I don't need right now.  The new super sized models were 50 plus, OK I understand that part. I asked again about the single blisters, can you check the GW website? yep, 38 dollars a piece.. 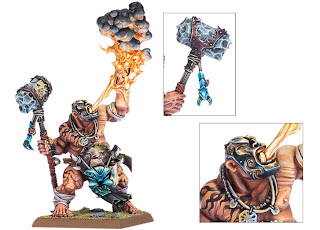 Test Model that counts-as
Driving home, I knew I could never afford to purchase a fully decked out army. Which was a huge disappointment, because I really like all the models and the characters and heroes would be so much fun to paint. I realized I needed to improvise. Once home I flipped through the codex and decided on the Mournfang Cavalry. That set of models I considered the weakest with a fairly unbelievable driving posture, I didn't really dig them all that much. 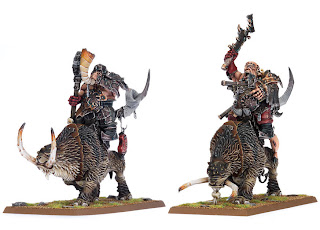 mournfang:40 dollars for 4 or 5 would have been better

Two models cost 40 plus and I figured saving could start there. This is what I came up with: Ogre on chariot pulled by a human slaves. 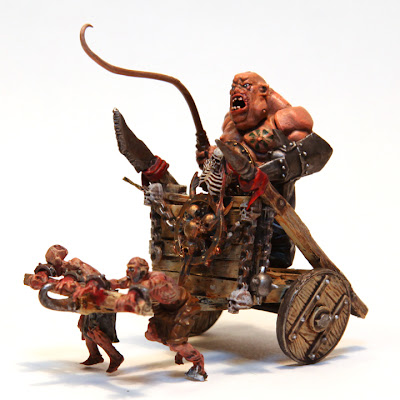 The model is a counts as Mournfang Cavalry. It's a counts as a monster with impact hits and the works. The guy can dish out some good damage and the slaves stuggled in their last minutes and can create good damage as well. All in all it works. 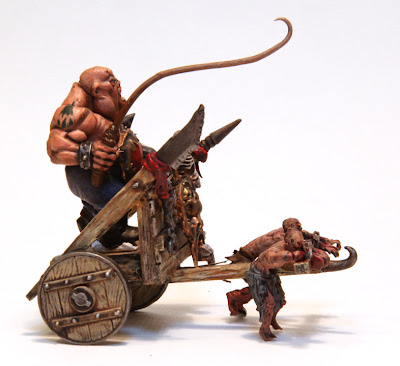 I really enjoyed painting the Ogre. It was much harder then expected and I think I can improve a lot. The pink skin contrasts well with the pale coloring of the slaves, who don't have such full bellies. I played with the tattoos but want to figure out a way to mute them to make them look older. 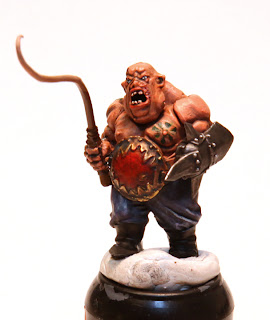 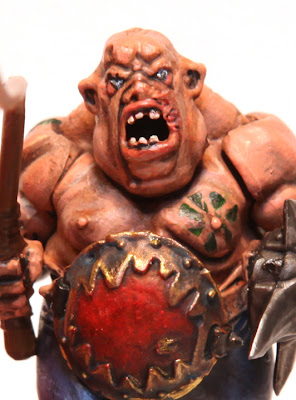 The cart was made with balsawood and some bitz from the bitz box. I painted it in a light wood color to make it look like high mountain trees like pine and birch. I added some swirls of Bleached Bone onto the wood to make it look like grain, on the left post that worked out well. I modeled the wheels kind of crooked, because of the weight of the Ogre riding in it. 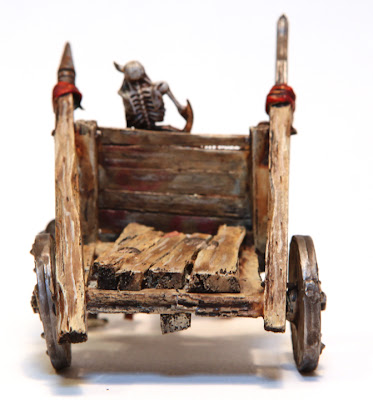 The slaves are Mantic zombies and I worked a bit on details like the positioning of the slave on the left (hopeless expression) and the metal wrist bands cutting into the slaves hands, making them bleed a bit.
Their feet positions will be fixed on the base, right now they are unfinished. 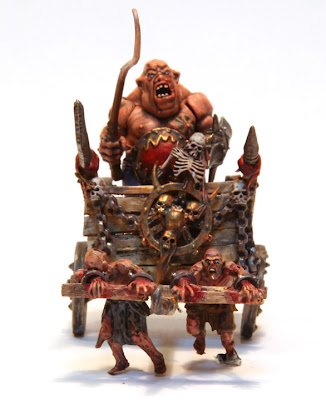 I don't believe GW sells the monster bases (50-100mm) in any of the bases sets, so I made one myself with some sand and apoxie sculpt on top of a piece of movement tray. Here that piece is, unpainted 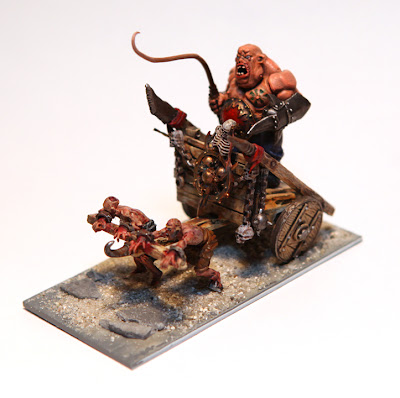 All in all, the model was fun to make and of course didn't cost anything, as long as you have an Ogre. I am planning a how to on the second one of this unit, hopefully it will inspire Ogre players to save a bit.

I am really looking forward building up this army and am still looking for any of the character models, metal is fine. Let me know if you want to trade or do paypal. I have a feeling I am going to be in it for the long haul...

oh and comments are welcome. Just letting you all know, I changed the comments settings to moderation due to the HUGE amount of spam we are getting after being named Blog of Note by Google. So let me know and I will publish asap
Mike
Posted by SC Mike at 7:16 AM

Email ThisBlogThis!Share to TwitterShare to FacebookShare to Pinterest
Labels: Ogres