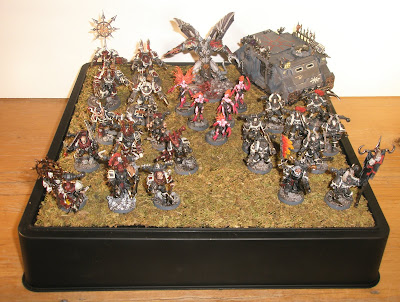 In the past when I went to play a game of Warhammer I brought with me a simple office letter tray for collecting my dead models and moving my army around the room. This has proven to be both a great time saver, and a good way to make sure I did not lose anything. The only problem was I did not like to carry around a tray plus a display board. It was simply too much stuff, so the display board was left at home. Unfortunately at a recent tournament this was detrimental as I received a perfect army painting score except for the two points I lost for not having a display board. I have now solved this problem.

Introducing my quick and easy multi-purpose display board and carrying tray. I picked up a cheap plastic tray at a discount store for only a couple bucks. The one I bought was clear plastic so I spray painted it black. I then cut up a cheap moss flocked mat to fit on the outside bottom and the inside of the tray, and glued it down. I decided to put flocking on the outside and the inside, so I have options for how I display my armies. The moss mat was the cheap kind craft stores sell around the holidays for putting under Christmas displays. You could also flock the bottom as normal with your favorite basing material just be sure to seal it really well so it does not rub off. The tray I bought also conveniently had a raised lip around the edge on the bottom so I cut the mat to fit inside the lip so the tray still sits flat. Now I have a tray for carrying my army around in, and when I flip it over a base to display my army on. This whole project was really quick and took me no more than an hour to put together. 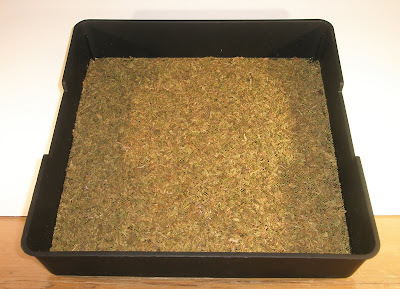 I liked this project because it reminded me that not everything has to be complicated to be effective.

Michael
Posted by Michael at 6:16 AM

Email ThisBlogThis!Share to TwitterShare to FacebookShare to Pinterest
Labels: Modeling