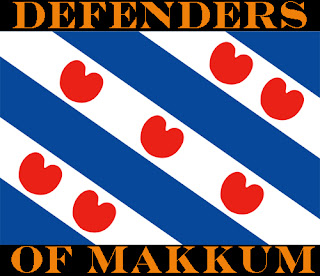 After a couple of weeks, I have made quite a bit of progress on the swordsmen of the Defenders of Makkum. I received the bases from Dragon Forge and was able to paint up about 12 models and have two models in progress, the standard bearer and the wizard. Let's go to the pictures:

Here are the first models, based on their red brick bases. The movement tray is just a working tray, I am going to build something different. Also no terrain yet in between the ranks, haven't gotten any yet.
For the Dutch readers, they recognize the Frysian flag with red hearts, very cool flag. I painted it reversed, I like the flow better this way. 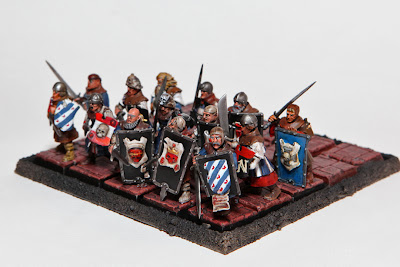 All the models are heavily kitbashed and meant to depict veteran type warriors, grouped together from different districts around Makkum and called up to the city to defend it. A lot of men have grey hair to make them look a bit older. Different shields mean different homesteads or allegiances. 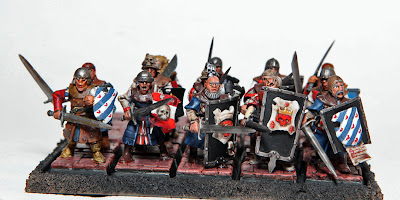 This is the emblem of the current city of Makkum in Friesland, Netherlands and I thought it would be fun to paint that on the standard. 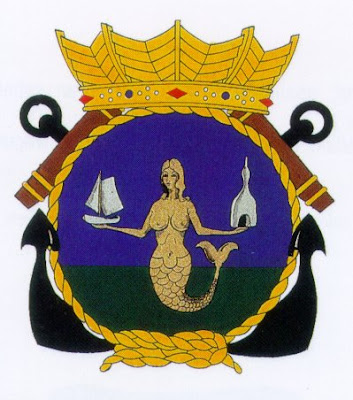 I still have to work on it a bit, but it looks good enough for now 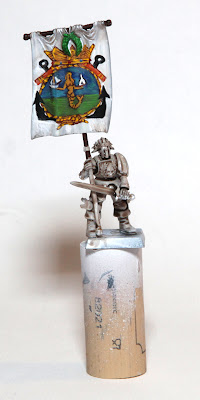 Suddenly, on a sleepless night I got inspired to paint a wizard. I have worked mostly on his cape and book. The inside pages are done. It was really fun to do and my new, special for painting-reading glasses are really helping! 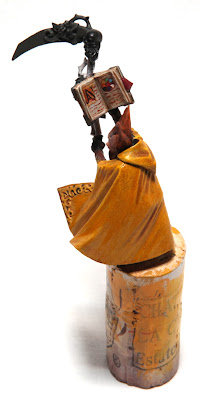 Email ThisBlogThis!Share to TwitterShare to FacebookShare to Pinterest
Labels: Defenders of Makkum, Empire