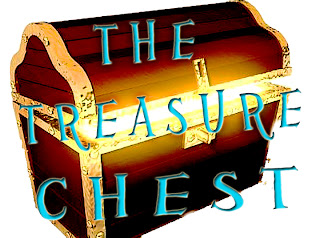 Show off some swag!!
When I was a teenager, my mother took me to England for a graduation present. Obviously, I was excited to go, seeing as how I was going to be going to the home of my favorite hobby. Visiting relatives and seeing where my grandmother emigrated from was all well and good, but I had an agenda…visiting as many Games Workshop stores as I could!
By the end of my trip, I had bought boxes and boxes of miniatures and had visited about 9 stores. The most memorable was in Reading where the store manager at the time was blown away by the fact that an American - all the way from California - was so excited about the hobby. He was very nice and showed me all kinds of cool mini’s that were already released in England but were still about 3 or 4 months away from being available in the US. 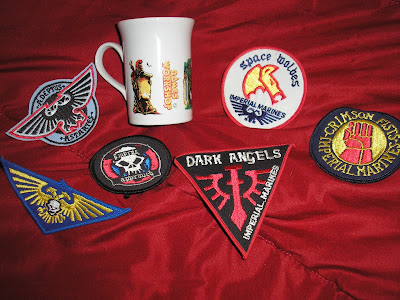 He gave me a souvenir coffee mug and some newly released patches (which you can occasionally find on eBay) He also gave me a few pages of Rogue Trader stickers which are pretty cool.
In the years since, I’ve kept an eye out for cool Games Workshop swag – Terminator patches, store opening and birthday posters, water bottles, pens, banners, t-shirts and more. I don’t try to collect everything out there…but things that I find interesting and cool. I try to avoid bootleg stuff, but occasionally I find interesting items such as Warhammer watches or resin copies of tournament trophies. My family in England or friends who visit Warhammer World get me cool “odds & ends”
such as the Bugman’s Brewery coffee mug which you can only get in Nottingham. 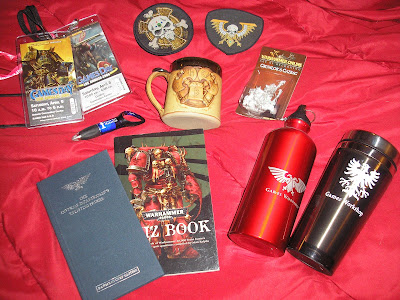 In the early 90’s GW used to have something for independent retailers called the “Preview Deal”. It would contain a few blisters of unreleased metal minis, some sprues of upcoming minis and occasionally photos of models in various stages of production.  40K Minotaurs with lasguns on their horns, plastic High Elf archers and Spearmen and photos of Orks in production to name a few.
I missed out on the minotaurs, but I’ve gotten some cool things over the years. I’m really diggin’ the new Warhammer and 40K flags that are out now…I can’t wait for my local GW Store to celebrate its birthday!
I hope you’ve enjoyed this small sampling from my collection of swag. I’ll dig out some more stuff to show off for a future posting. If you have any cool photos of rare or interesting stuff or an amusing story or two, please feel free to share! We welcome all comments!
Glenn
Posted by SC Mike at 7:45 AM