One of the San Francisco area's biggest gaming convention is coming up at the end of the month.  KublaCon is a large 4 day convention that has hundreds of games and events.  Why do I mention this?  One of my favorite events is the KublaAwards painting competition.  It is a relaxed painting competition that uses merit based open style judging instead of just podium style awards.  That means that entries are judged on their own merit and not against the other entries.  Last year was my first time attending this convention.  I did not prepare any models specifically for this competition, but I entered a couple on a whim and won a silver medal for my Daemon Prince.  This year my goal is to do at least as well.  They allow you to have up to four entries, two single models, one large model, and one squad.  This year I want to enter something in each category. 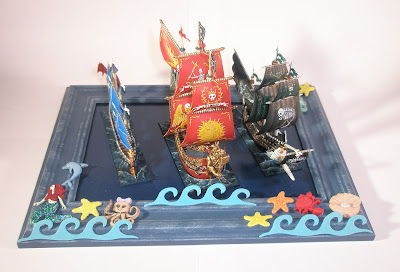 After that long introduction here is the project.  For my squad entry I want to show off some of my Dreadfleet ships.  Usually when I paint a whole squad I batch paint the models and finish them to a lesser standard than I do on a one off piece.  For that reason I struggled to come up with something that I painted this year that was good enough to enter as a squad.  Luckily these ships fit the bill as I treated each Dreadfleet ship as a unique model and really labored over the tiny details.

For this display my idea was to get a tacky ocean themed picture frame, like you sometimes see in coastal tourist shops, to base the models on.  Unfortunately I was not able to find one, so I had to stop at a local craft store and make one myself.  I bought a cheap 5" by 7" picture frame and painted it blue grey.  Then I glued on cheap clay beads of undersea animals and foam cutouts of waves and starfish.  The foam pieces were even self adhesive making this project extra easy.  For the base itself I cut two pieces of plastic sheets to the size of the frame's glass.  Then on one of the sheets I traced the bases of the 3 ships onto it and cut out holes for the models.  Just glue the two pieces together to make a tray with indentations to securely hold the miniatures.  I painted the plastic insert blue and sprayed it with gloss varnish before gluing it into the frame in place of the glass.  This whole project took me only a couple hours over the weekend.  It is cheap, easy, fun, and hopefully functional. 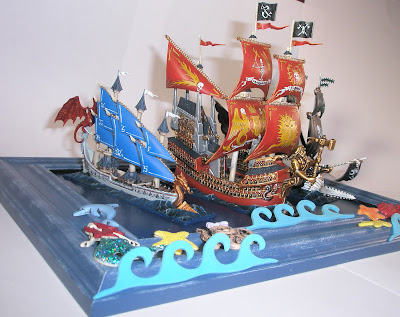 Of course you could take this same basic idea and theme it to fit whatever models you want to display (you could even make it serious instead of goofy if you really wanted).  You might have noticed that my last couple posts have all had a whimsical element to them, but I swear I paint lots of serious grimdark models too.  If you are in the San Francisco area and want more information on KublaCon just follow the imbedded links.  If you want to share your own projects with all of us in the Santa Cruz Warhammer community be sure to join our facebook group.  We would love to see what you are working on.