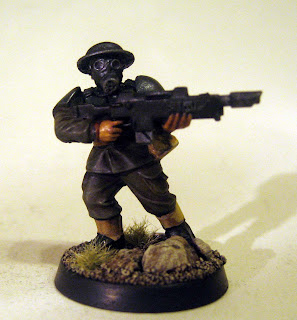 With all the hype over the new codex and models, I have been motivated to build up Imperial Guard troops as well.
I was really impressed with Dave Taylors Genswick 33rd Rifles, and after seeing the Seperate Head System from West Wind, I went looking for a dish shaped helmeted head with a gas mask, and there it was in the Secrets of the Third Reich line, as well as other great masked heads. 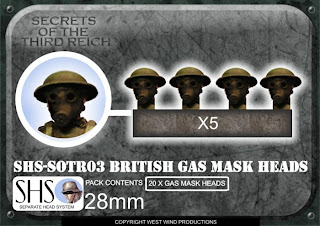 I bought a pack of 20 heads for about $7, I figured I would find a figure with a trench coat and model some leg wraps, but use the Guard weapons and gear so they still looked Imperial.
I used to have a bunch of plastic Cadians , but I donated them to some friends. I kept my Steel Legion and Ratlings, but I wanted to try this out so I picked up a box of 5 snap plastic Cadians for $8 to try the heads out.
In this attempt I just did the head swap only, I wanted to see what could be done with a very simple conversion. With the numbers required with the new codex, I wanted to keep the modeling time and cost down per figure. This guy is $1.95 with this cheap version of a Cadian, or $2.55 with the multi part plastic Cadian shock troops box of 10.
I painted the uniform green with a heavy brown wash with the shoulder pads and helmet a darker green black that was metalized with a light drybrush of gunmetal, and the gear was done in a tan, inspired by the British WWII uniform. 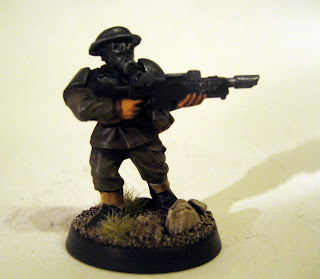 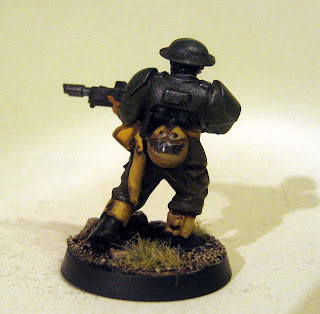 I based with a sand mix and some new static grass that I like very much from Gale Force 9 that was only $4 and you get a ton of it, the color is dead grass, it is a much more realistic color and I think it looks great.
I think it came out nice and I like that it was so simple, yet the model looks unique, and still looks Imperial Guardish.
Let me know what you think.
John
Posted by SC John at 12:12 AM