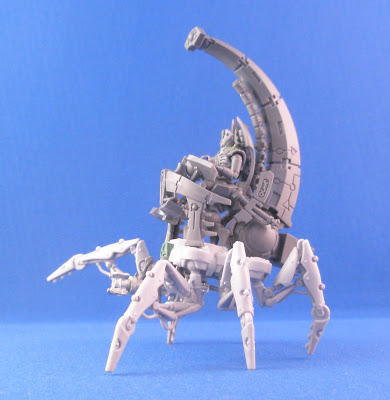 With the release of the new Necron codex my old Necron army needs to be updated, and I'm sure I am not the only one. Many of the new units in the codex are great, but not all of them have models yet. Some people complain about not having an official model to play with, but I personally like the challenge that presents to converters.

One of the units that jumped out to me is the Triarch Stalker. "Like an enormous mechanical spider, a Triarch Stalker looms over the battlefield with its multiple slicing limbs and devastating weaponry controlled by a high-ranking Triarch Praetorian." That sounds great, and the rules are equally cool. It is a Walker with a "heat ray" that shoots either as a heavy 2 multi-melta or a heavy flamer. As a bonus it has the "Targeting Relay" special rule which means any unit that shoots at a unit that was hit by the Stalker counts all of its shots as twin-linked. In my mind that all read as , must have! 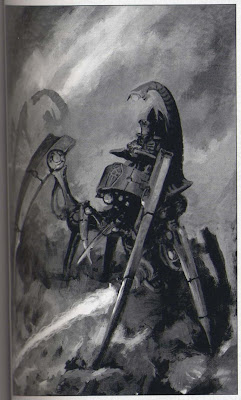 The first thing I did when starting this conversion was to examine the artwork in the codex carefully. I actually printed off a copy of the artwork and made notes on it of what were important elements to include. What I saw was...
-6 main legs
-an exposed driver
-a curved portion on the back that matches the other Necron vehicles
-a protective front piece with a Necron symbol
-a large unique gun
-2 smaller mandible like limbs 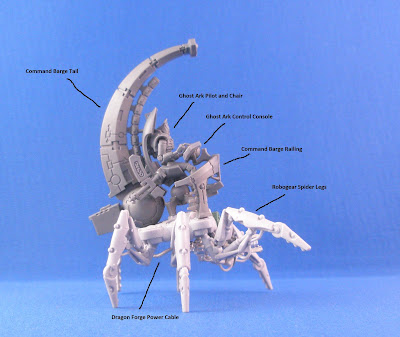 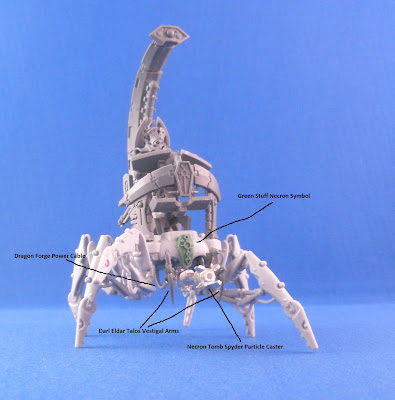 This is a really simple conversion. I built the legs and body of the Robogear Spider as normal. Then I took the curved tail piece from the Command Barge, Cut off the bottom portion under the ball, and glued it to the back of the Spider, you can see where to cut the piece in the photo below. There will be a small hole in the ball but it will not be very noticeable when finished. I filled this gap with a little square of cereal box card. Then I built the pilot and chair from the Ghost Ark. Leave the pilot's arms off til the end so that he can fit the controls correctly. Cut down the wires coming out of the back of the pilot so it fits neatly against the spine from the Command Barge. Then glue the chair to the middle of the Spider as close to the Tail section as possible. Next I assembled the railing from the Command Barge. Simply glue the railing to the front of the spider over the pilots legs. Be sure to use plastic glue when assembling this conversion because it hardens slower than super glue which will give you time to fit all of the pieces properly. That finishes the main body of the Stalker. 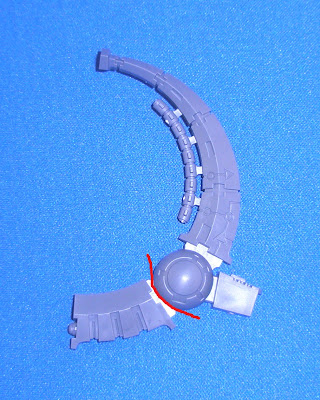 Now onto the details. Assemble the control console from the Ghost ark and cut the stand flush so that you can glue it to the back of the railing. At this point you can add the pilot's arms so that they are resting on the controls. Next you need to find a cool gun that you can fit under the model. I used a metal particle caster from the Tomb Spyder that has been in my bits box for years. There is a circular whole in the bottom of the Spider torso that I plugged it into. I finished the gun by adding a Dragon Forge power cable running from the rear of the gun into the rear of the spider torso. Then I added two small arms from the Dark Eldar Talos kit to the front to look like mandibles. The last detail was to add a Necron symbol that I press molded in green stuff that I cast of of the Ghost Ark.

That is it. I think this conversion is very close to the artwork. The final model is slightly bigger than a Dreadnought but not by much. I was hoping that it would fit onto a 60mm base, but unfortunately the legs stick out to far. I will have to find a slightly larger base or use it without one. I used parts from both the Ghost Ark and the Command Barge kits, but you could make this work with only Command Barge pieces. Just substitute the pilot and the control console for ones from the Barge kit. The pilot won't be as bulky but it will still work. 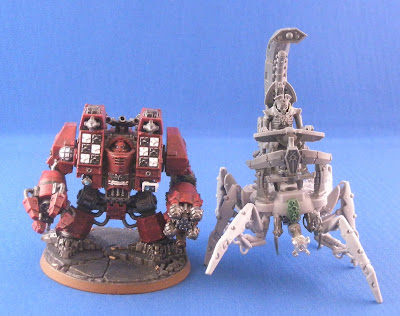 Michael
Posted by Michael at 7:31 AM