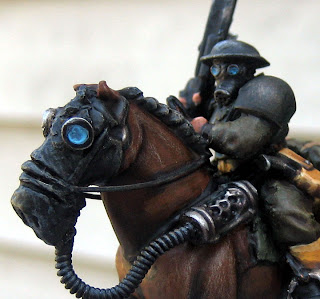 Here comes the cavalry! The Ardwick 23rd have called for reinforcements, and the Royal Lancers have arrived.
I wanted to build Rough Riders for my guard, but the old sculpts are pretty goofy. I was thinking about bikes or Cold One lizards or even bears for my rough riders.
Mike has been working on mechanized future cavalry, so in contrast I decided to kick it old school, and build a space pony.
In keeping with the theme of my Ardwick 23rd, gas masks and lots of kit, seemed like the way to go. 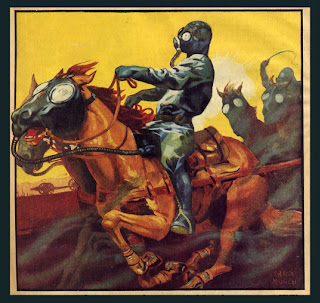 I found this old print by Frank Murch online which was inspiring, some sort of anti government propaganda, and I thought it looked great. 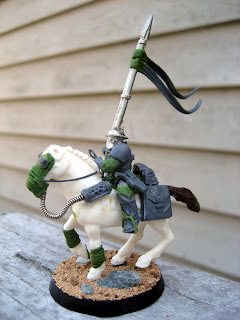 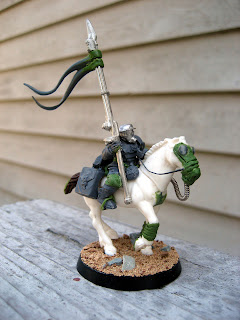 I used an old Empire Fantasy horse which I trimmed a bit of the tail and mane. I used greenstuff to sculpt the mask and leg wraps and other details and a Cadian with West Wind head for the rider, cut up the legs and positioned them and filled with greenstuff.
The banner was a wood elf bit, saddle bags, blanket roll and the horse mask canister are from the Ravenwing sprue. I was lucky and found a baggie of 5 of the original power lances in the bits bin at a local store. The horses breathing hose is a bass guitar string, and the reins were made by heating and stretching plastic sprue.
I originally planned on using the las rifle carbine with folding stock from the Armor sprue, but the codex says lance and laspistol or hand weapon.
He was painted and based to match the other Ardwick troopers. 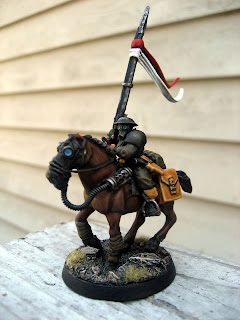 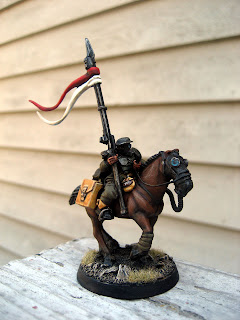 Well I hope you like this more traditional take on a rough rider, I had fun making it.
John
Ardwick 23rd Imperial Guard rough riders