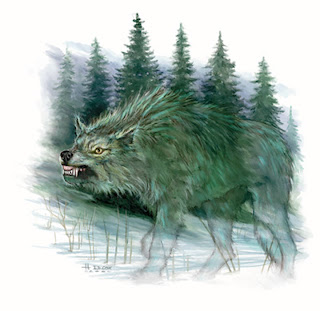 Well this is a two part post, first Mike brought a recent rumor to my attention, featuring our friends at MaxMini.
Word is they have a giant wolf model in the works just right for Space Wolves to ride around on. Well, unlike the Games Workshop rumors, where we have to wait for some secret inside leak or some sneaky cellphone pictures, this is MaxMini, they give us free stuff, to give out to our readers, so I figured I would just ask them. I emailed Przemyslaw, and here is what he had to say;
Hi John,
I confirm the rumor. We`re working on a giant wolf. It`ll be smaller
than Canis`s mount but still big enough to hold larger warriors like
SM. We still haven`t figured out the final price.
Definitely it will be cheaper than Canis ;) .
The full kit will have 3 optional heads and removable middle section
with 2 variants - you`ll be able to choose part with the armoured
rider legs or no rider legs, just fur.
Can`t share any pics as Jarek is resculpting the head as I was not
happy with the way it has turned out.
BTW - if you have any suggestions on the look, or some cool pics
please send them -
we`re still able to make some changes to the sculpt.

cheers
Przemek
Well, there it is, a rumor no more, but now I can't wait to see what it looks like, the sculpts have been great so I am sure it will be awesome, and you guys heard him, if there is any input you might have, now is the time to leave a comment, and let him know.
UPDATE! check here for photos and new info.
The second part of this post is a short review of the Games Workshop Invasion! event at my local GW store. I was notified online of a special event at my local store, with games, special merchandise, free prize drawings and a banner contest.
I printed out my pass, and a banner template to compete in the contest. I called the store to see when they opened, as the first 30 with passes were entered into a drawing for Gameboard set, and I wanted to be early to make the cut off.
I drew up my banner, there was going to be three divisions one for Fantasy, 40k and LOTR, and I thought I would max out my chances by entering all three, but it took me so long to paint the first, that I just did the one.
I showed up a bit before 10am this morning to find about 10 others waiting for the store to open, so I had made the cut for the Gameboad drawing, and was happy to be early for the exclusive models. I entered my banner, filled out the raffle ticket and got a free paint pot for showing up.
I was disappointed that the only "special" item for sale was a cheap looking ( with made in China sticker on the box ) folder/portfolio thing for 15 bucks, but I got it anyway. Someone mentioned that the ad promised "Exclusive items for sale and a number of direct only models " to which the employee replied " the folders are all they sent us", they did give out some free posters and stickers. 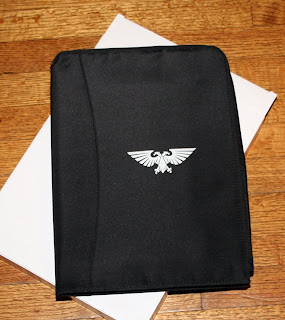 I had to wait until 2pm for the first raffle, as you had to be in the store to win, so I escaped to the movies and watched Boondock Saints II, and was out just in time first raffle, which I didn't win, and had an hour to burn waiting for the banner judging.
I used the time to look over the competition. I couldn't believe mine was the only entry that was painted, all the others were just pencil sketches, and I thought my chances looked good. I waited it out, they decided to judge all the banners together in a single contest, and after the store manager's decision, I was a bit disappointed with 3rd place, but I had lots of folks telling me I should have won, so that made me feel better, the winner's prize was any blister pack off the wall.
I decided to visit Mrs. Scdarkangel at work to burn some time, and was back for the last drawing for the $50 online GW voucher, I couldn't believe it when the same guy that won the Gameboard won the $50 voucher too. Some guys have all the luck. After that, I packed up and headed home.
John
Max Mini