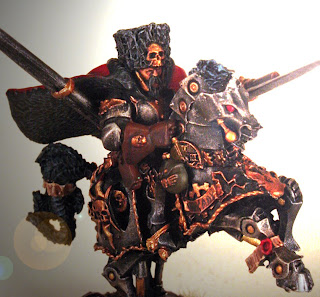 This is my "counts as" Mogul Kamir on Cybersteed for my Vostroyans.
You may have seen my last Vostroyan Rough Rider post, and remember the story of brave Captain Alexi and his trusty steed Arkady.
In that story Arkady is mortally wounded in an explosion, but Captain Alexie has pulled some strings and had what was left of Arkady implanted into a mechanical horse so that he may serve his master again. 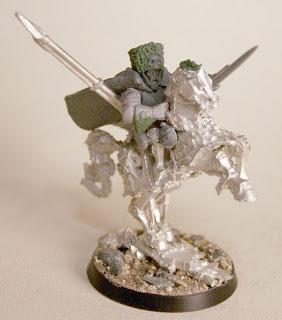 I decided to use the fantasy Engineer Mechanical Steed with an Empire Pistolier torso, coat and sword arm, and helmeted head. The model's rider has a bionic right leg, which also fits the fluff for Captain Alexie. I added a Chaos Space Marine right arm with an Imperial eagle device that I shaved from an ammo box. I used greenstuff to enlarge the gauntlets and to cover the helmet, and build up the fur hat, while leaving the skull and scales visible. I also shaved a skull off a Chaos Marine bit to add to the left gauntlet. I then added a lance, canteen, grenades, and a Space Marine bolt pistol in the holster. 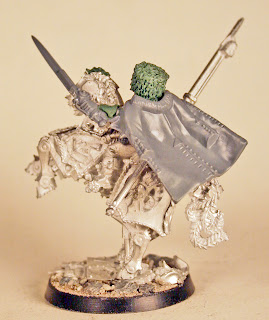 After some primer and a quick paintjob, our hero is ready to lead the Vostroyan Royal Lancers into battle. 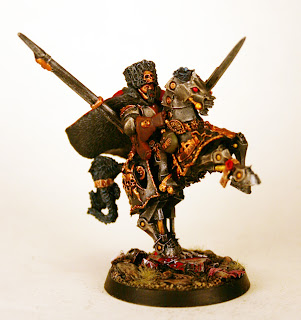 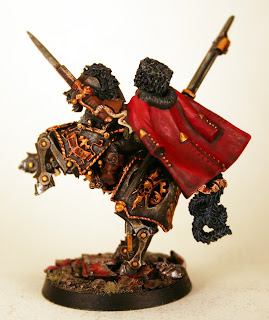 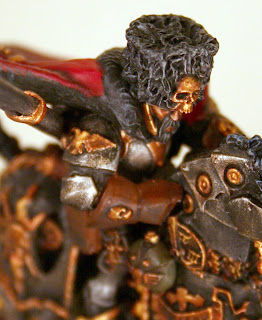 here you can see the finished arm with eagle on shoulder, wider gauntlet and the head with some of the original helmet details saved. 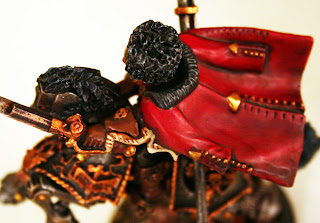 and the other widened gauntlet with added skull. I really like the way the coat came out.
John
Imperial Guard rough riders Vostroyan