Posted by SC Mike on July 29, 2010
The end of the Stormwardens Project coincided with the new Fantasy release, which got me really inspired to start another long term project, this time with Fantasy. No, the Bishkek 2nd are not forgotten and I am preparing a post about my kitbashed and retooled Veteran Squad, but the urge to do Fantasy has a firm grip on me.
I decided to do the Vampire Counts and aquired the army through our own Santa Cruz Warhammer Barter Bucket. About how I got the deal and what a great thing the Barter Bucket is, I will do a post next week. Anyway, I quickly decided that in order to make the modeling fun, was to do some interesting basing. Here are some images of building the troop: 10 ghouls.
I used a 50/50 mix of Apoxy Sculpt and built little mounds on 5 single bases. 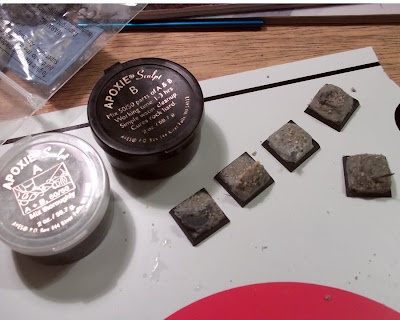 The ghouls scour the battlefield looking for tasty things, so I made the bases pieces of a battlefield after the battle:
here are the five single bases in buildup:

A broken shield, a snapped spear, a hand that sticks out of the mud, all the usual gloomy details..
Here is the finished rank: 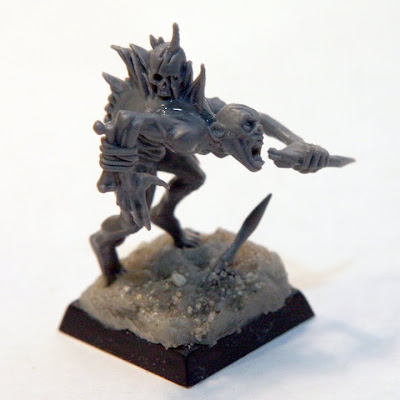 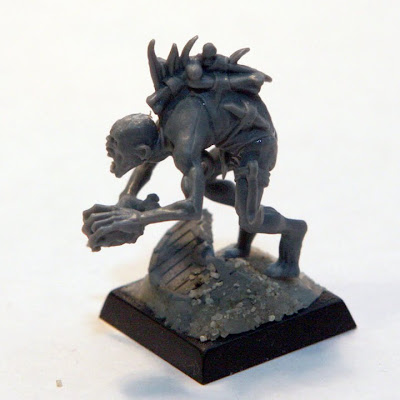 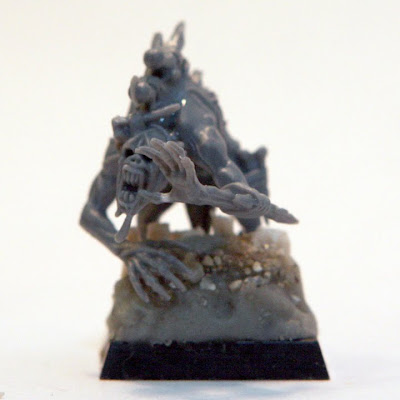 You will probably agree that the ghouls are a very, very succesful sculpt and at first glance are my favorite models in the whole VC range. They are dynamic, realistic, detailed and they look terrifying, in short really fun models to build.
The second batch of five was to become the front rank of this group and I wanted it to be one solid rank, all on the same base. For that I glued all five bases together....

and add Apoxy Sculpt up top for terrain. I also filled in the front opening caused by the beveled bases. Here is the front 5 with the boss in the middle: 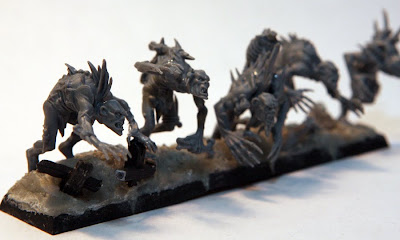 And here is the finished group. 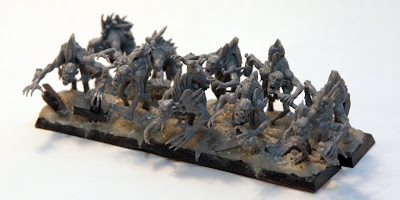 Modeling Fantasy is very different from 40K, mostly when you look at the backstory of your army. There is a lack of 'history' of Warhammer world. Although GW wants you to believe it is on par with the Empire in 40K, it really is a lot more shallow and added to that is that for us in the 21st century, its easier to connect with the bigger picture of life 40.000 years from now then with life in Fantasy land. That made it harder for me thinking about what I am going to do with this project. One advantage for me as a builder: models in Fantasy feel more real as individuals, they all have fun skills, attributes and recognizable weapons, and that makes it interesting to really spend time on each troop and give them their own identity.
To start this process I had to come up with a name: 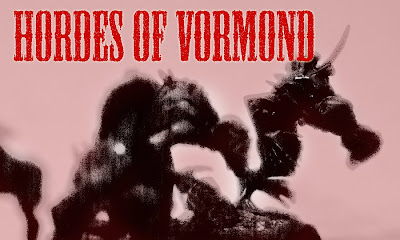 Hope you will kindly follow some of my endeavors, I am very excited to add some Fantasy to the Santa Cruz Warhammer mix!
Mike
Hordes of Vormond Vampire Counts