Posted by SC John on July 28, 2010
Well, my Vostroyans have a cool looking command squad, the models are great, but I needed something a bit different to shake it up a bit.
I have done other "counts as" models for this army and I always liked the idea of Nork Deddog as the Commander's bodyguard.
I Remembered a cool WWII story of a Polish artillery group that had a real 6 foot tall 500 pound Syrian Brown bear mascot that walked upright and also went to war and even helped out by carrying heavy stuff. 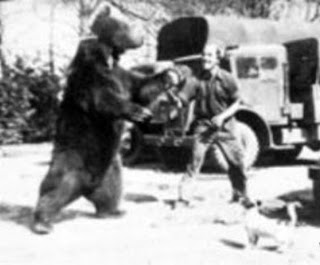 During the Battle of Monte Casino;
Voytek, who all this time had been watching his comrades frantically loading heavy boxes of ammunition, came over to the trucks, stood on his hind legs in front of the supervising officer and stretched out his paws toward him. It was as if he was saying: I can do this. Let me help you . The officer handed the animal the heavy box and watched in wonder as Voytek loaded it effortlessly onto the truck. Backwards and forwards he continued, time and time again, carrying heavy shells, artillery boxes and food sacks from truck to truck, from one waiting man to another, effortlessly. The deafening noise of the explosions and gunfire did not seem to worry him. Each artillery box held four 23 lbs live shells; some even weighed more than a hundred. He never dropped a single one. And still he went on repeatedly, all day and every day until the monastery was finally taken.
So I had to have a Voytek for my Vostroyans, and I wanted a GW bear model, and wouldn't you know it, they just came out with one for the Fantasy Empire army, and after removing some of the unneeded stuff, this is what he looks like. 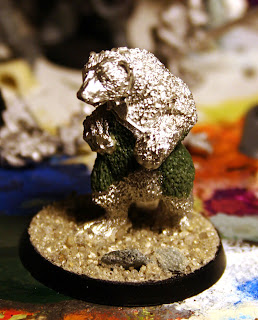 I am unsure how to deal with his ripper gun stats, I guess I could just have a gun slung on his back but I was trying to think of a cooler way to represent the ripper gun ranged attacks, like boulder throwing or a cyber growl attack or something. Anyone have any ideas?
John
Vostroyan