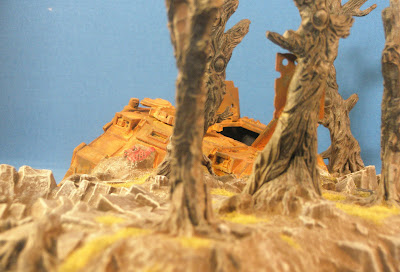 About 6 months ago I read a post from William Osborne on Bell of Lost Souls on using an inexpensive product to create real rust effects. That product is Sophisticated Finishes Rust Antiquing Set. To make a long story short, I picked up a set at a craft store and have been experimenting with it on various projects. The set is really quite simple. It is two bottles. The first bottle is a paint with lots of iron particles in it called the "metallic surfacer". You paint this on first, and apply it just like any other water based paint. The second bottle is the "antiquing solution". It is a watery liquid that is a mix of a few chemicals but I think it is mostly Ammonium Chloride. You wash this on over the first layer, and then wait. In about an hour you will start to see rust appear, but the rust will continue to develop for about 8 hours. I want to emphasize that this creates real rust, not just rust colors. Now that we got the description out of the way, let's jump into some applications. 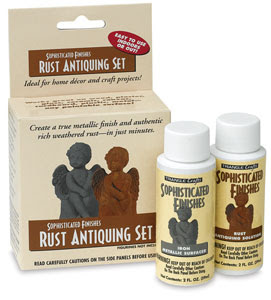 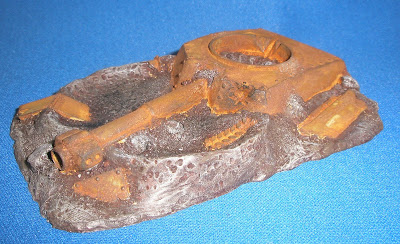 My first project was a resin wreck marker. For this I just painted the whole thing with the rust effect. I think the rust turned out really well, especially considering I only spent 5 minutes painting it (not counting drying time). With that success I wanted to see if I could apply it a little more carefully. 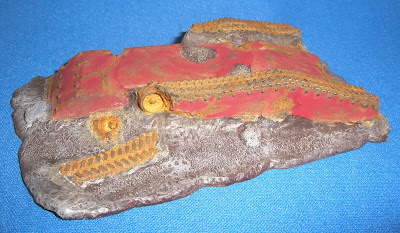 My second wreck is also pretty simple. First I just basecoated the whole vehicle mechrite red. Then I painted the metallic surfacer on the tracks, rivets, cracks, and lightly stippled it over the hull plates. Then I applied the antiquing solution, and when it dried I had a pretty good looking wreck that still still has paint on the hull.

I declared the wrecks a complete success and decided to take this experience and move on to more complicated projects. 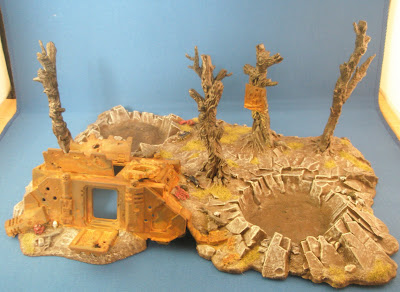 Did you recognize the picture at the top of the post? It is the very cool GW Blastscape. I painted the whole vehicle with the rust effect as I figured it looked like it had been sitting there for a long time. I also painted the warning sign on the tree with rust. I painted and flocked the rest of the model as normal. Below are some detail shots of the tank and a close-up of the warning sign so you can really see the rust detail. 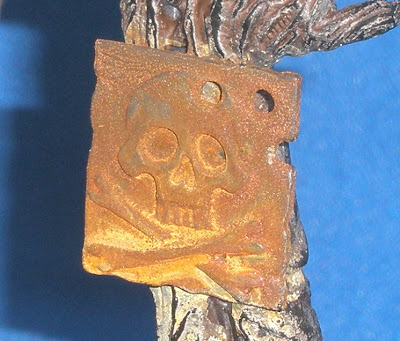 My most recent project used the rust finish in a very detailed manner. I painted the new plastic Nurgle Lord. As a side note I think this is one of GW's best models to be released in recent history. In the photo below you can see the model completed except for the rust on the left and the finished rust on the right. I applied rust to the axe, face mask, icons hanging from his waist, and corrosion on his armor. After I applied the rust I also added an edge highlight of Boltgun Metal, and finished the basing. As you can see it worked pretty well on the axe but is not very pronounced on the small details. However, I am quite happy. The lighting and colors are better in the first photo, but you can still see the rust effect. 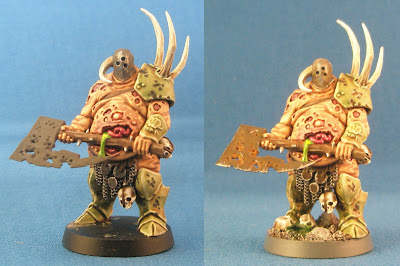 I am really pleased with how well this works, and I have learned a few things to improve my results. This stuff works better on larger areas. This is because you really want to soak the surfacer in the antiquing solution. On smaller areas you can not use as much solution because it will run all over the place. Although the solution doesn't have color on it's own it will pick up a little of the iron pigments and you will end up with bits of rust anywhere the fluid runs to. Also if the rust isn't as bright as you want on the first coat you can apply subsequent washes of the antiquing solution to further rust an area. Even keeping those tips in mind, this kit is really easy to use.

I hope you stayed with me and, made it to the end of this long article. I now keep this rust set on my painting table and use it for a lot of applications. It is fun to watch the rust slowly develop. If you want another method for painting rust be sure to check out John's old article. What do you want to cover in rust?