Santa Cruz Warhammer is asleep, but the game scene in Santa Cruz is wide awake! 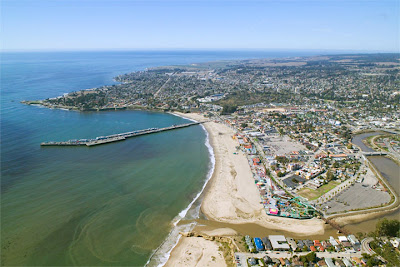 This morning I received an email from a local gamer, Scott W, who announced a new website for the gaming group he founded, G3 Santa Cruz. The website looks great and I invite all of you to check it out here:

Scott used to come to the Santa Cruz Warhammer game nights and being a recent transplant from somewhere to our town, we opened our arms and he became a regular member of our low key group. Now he has become one of the key players in town.

With this new website and a new gamestore in town, Mythic Games, Santa Cruz once again is thriving in the gaming scene. This was NOT the case when I started Santa Cruz Warhammer in 2007. There were isolated pockets of gamers, with two stores in town, struggling to keep sales from GW growing. The players didn't really mix too much and there was not overarching sense of camaraderie.

Our blog was not much read in Santa Cruz, and we gained more respect from fellow bloggers online then from local gamers. Truly, being in the third year of SCWH and with the Storm Wardens project already finished, a majority of local players had never heard of our little blog. The first years John and I did our blog work in anonimity and we didn't really ever play games with other people.

Then John had the idea to organize the SCWH game nights at our Community Center. We booked an evening, made flyers, and organized some food. And our first night, September 2010, we had a huge turnout with many 'closetgamers' and oldschool warhammer players coming out of the woodworks to reconnect. Many of the players that came that first night, are now very active in Santa Cruz and John and I consider them our friends.

After 3 game nights we looked for a cheaper alternative and found it at our buddy Glenn's mobile home park where the community room really became our monthly hub. There we kept the gamenight for over a year, and we really got to know Scott who later would found G3 and Reuben, who later would own his own gamestore, Mythic Games, which is now the epicenter of gaming in Santa Cruz. The gamenights have now moved to Mythic, which expanded to allow more gaming tables.

After slowing down on posting, John started Santa Cruz Warhammer on facebook, where we have a low key but effective presence and it functions as a local portal, all designed to help gamers connect locally.

I know I speak for John as well; we feel happy (and a bit proud) to have been part of jump starting gaming in Santa Cruz again and helped connecting those pockets of players that never knew each other and now meet every week or month. That is what's needed: a connecting force that finds all these great people who play against each other, but not outside their circles. Building bridges has them all meet and they realize, they share a common bond. This also creates more sales opportunities for the local stores.


My own drive for going out, show off modeling projects or playing, is kind of low right now. I am internalizing a lot right now, modeling for myself, for some mental peace (I am insanely busy with work) and for an occasional game with my buddy Christian. I am planning to start a large charity project for 2013, after abandoning it in 2012. The financial aspect becomes complicated when you are aiming for 30.000 dollars or more but I think I found a solution.
John on the other hand has really gotten into the gaming and has become a central figure in Santa Cruz, around which a lot spins: he is a truly generous soul who shares all with everyone. He gives away bitz to people who need it, he helps at the local gamestore and he is working so hard in learning Warhammer at a higher level. It's awesome and I admire it a lot.


If you live in a kind of flagging gaming area, get some inspiration from this little history. You can make a difference!