Knights of Baltimorea: finished the Lion of Flanders

Posted by SC Mike on June 09, 2013
Years ago John organized the Knights of Baltimorea, Check the link here for all the posts on that thread.
A few months ago he brought it up again at the local gamestore and all of the usual suspects agreed to buy a knight and paint it up. In the end we will raffle off all of the models to one of the contestants, just for fun. I finally finished my model after working on it for a little while. 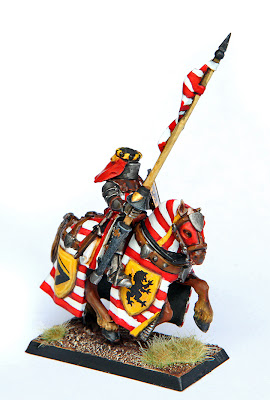 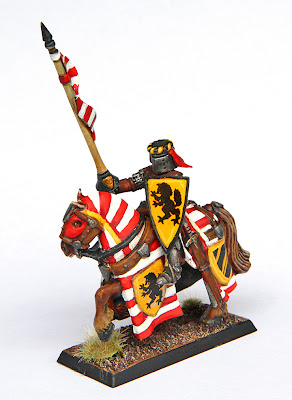 The color scheme was based on this medieval drawing for Germanic jousting knights. 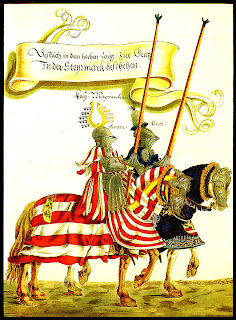 The emblems are meant to represent the power of the Flemish Knights in 1302, who defeated the French and French-leaning knight in a gruesome battle called the battle of the Golden Spurs. I was modeling the knight on Robert of Bethune, the official Lion of Flanders.

This knight was made famous in the 1838 novel The Lion of Flanders by Hendrik Conscience but the story was heavily romanticized, making Robert some sole savior of the Flemish soil. I actually own a victorian copy of the book and read it; it's great stuff.

It's fun to blend modeling and Warhammer: it gives your model some context.