The Santa Cruz Warhammer group in Santa Cruz, California has been gripped by a really fun, new project: playing games with little cars and modeling them in the style of Mad Max. The cars, mostly Hot Wheels and Matchbox, are cheap, mostly around 99 cents each and the modeling can be pretty daunting, at least if you want to make something good. You can also find actual cars used in the movies, like the Ford Falcon or the Chrysler Valiant, but those are out of print and only to be found on Ebay, for 5-10 bucks each.

There are few different road games you can play with these cars, like Car Wars or Road Wolf (which is what we play in Santa Cruz and is free online ), and there are plenty more, (if you know of some good ones, share them in the comments). The game does need a gaming surface, mostly roads and some buildings. The scale is smaller then 40K so you can't use any of those terrain pieces. The game rules are pretty much free and online and there is NO company support for it; it's a true grassroots movement!


Being a modeler first and a Gamer second, I loved the idea of buying models for a dollar and spending a joyful week on them, cutting them up and kitbashing them (and not having to spend 40-50 dollars). Before I saw Fury Road I bought two random good looking Hot Wheels and kitbashed them; here's one of them: 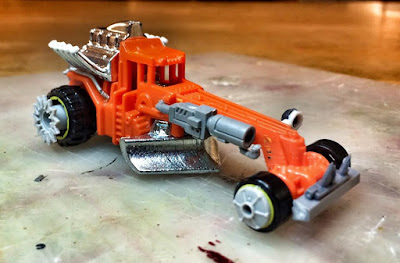 and the finished model: 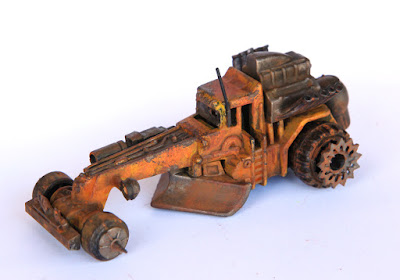 You can see that with a bit of inventiveness and good size bitz box, you can really have a lot of fun!

Here are some more builds from our group: 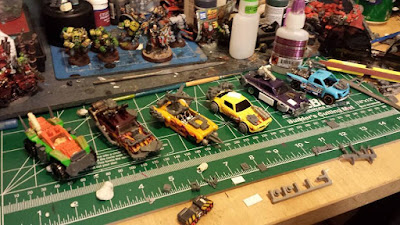 (Jordan Nichols, not painted yet) 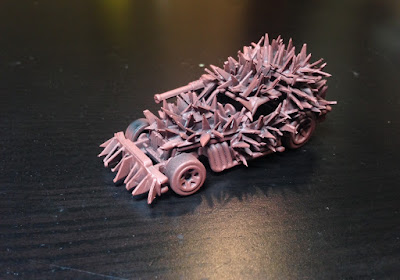 Then I saw Dave Taylor, whom we all admire, work on his Mad Max models; they are amazing! Dave really shows what's possible with good modeling skills and great vision. Here are three of Dave's cars for his Fury Road project, he uses them with his group in Car Wars and on his blog he shows wonderful how-to's. 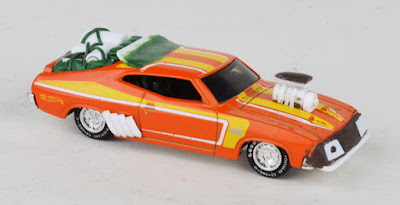 Dave is also part of our Facebook page Santa Cruz Fury Road and it's been really fun sharing ideas and showing of builds with him.

I tried my hand on copying Dave's Hedgehog conversion you see above and I am still working on it, but you can see how much fun it is to mess around with all this. 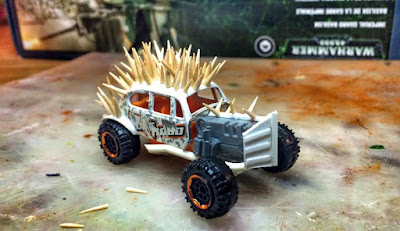 AND now I want to see someone tackle this one (Dave Taylor...) 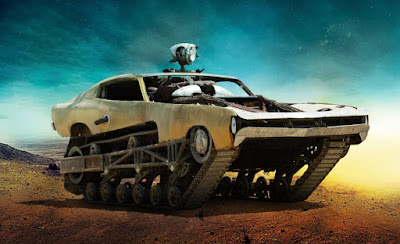 Here's our game board built by Sc John, founder and driving force in the Santa Cruz Fury Road Project: 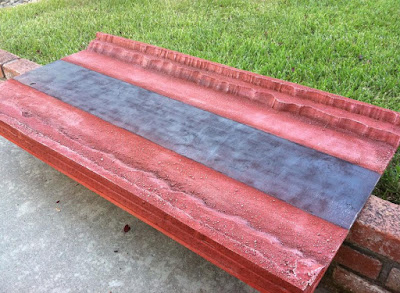 and after finishing it up: 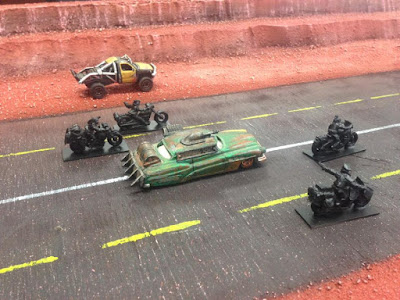 So far we have played one group game with our cars and we are still getting used to the rules. The dice rolling for Road Wolf is different, but makes for a lot of fun. After playing for a bit, you quickly learn how fragile bikes can be and how important the roads movement phase can be. In our game the road and it's hazards claimed almost as many cars as the fighting did, but to be fair we were driving a little on the reckless side.

Lots of local friends have started looking around everywhere for models.... SC John  found this little gem at the flea market for 50 cents: '73 Falcon, the original Mad Max Interceptor and it will get the treatment soon. 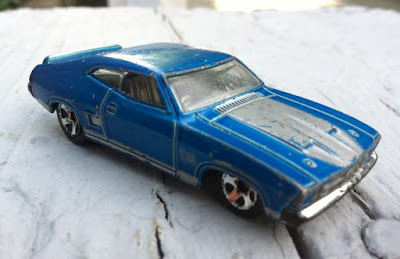 Cars can be found for pocket change at yard sales, second hand stores and flea markets, or new for about a buck at discount stores.

Scale can be a bit tricky for semi trucks and motor bikes to keep them in the scale range of the 1/64 scale Hotwheels and Matchbox cars, and dirt bikes are proving to be the hardest thing to find so far.

SC John started the group TWO weeks ago and so much has been done already! It's really been a long time since I felt this surge of inspiration going through our gaming community and you can do that as well! Start a group and start looking for little cars....