Back in March, after a conversation with my friend Kevin, we decided to tackle the old "Wolf Time Campaign" from the Book of the Astronomicon.
What follows are my posts about my progress that were posted on the SC Warhammer Facebook page but not here on the blog...


(March)
Last week I was chatting with my friend Kevin and we got to talking about the old RT Book of the Astronomicon and the “Wolf-Time Campaign” that is in it.

I told him I had never played that campaign back in the day. He said he still had all of his scenery for it.

Next thing y’know, I’m digging through my old RT models to see if I have all the required marines to play the campaign. I’ve never played Space Wolves so my Archangels will have to do! 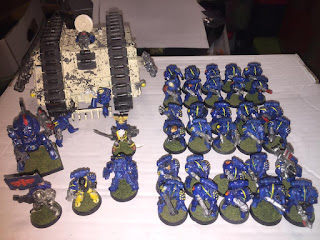 The Imperial player needs 56 models (technically less if you recycle units/models that get killed in the first couple scenarios - but this is Santa Cruz Warhammer... Go Big or Go Home!!!) 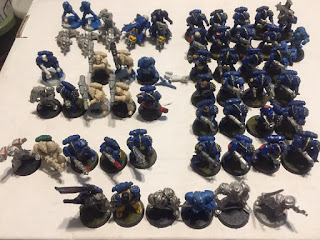 I was inspired and glued up a flamer marine and 4 las-cannon marines. I stayed true to form and used original 1980’s bases and even found a few 1980’s nickels to glue under the bases to keep them balanced. I used 4 of the old lead...err “metal” las-cannons that I had in my bitz box. 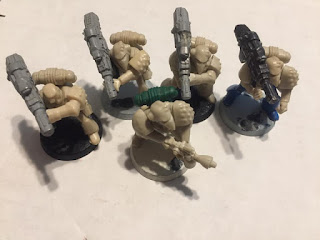 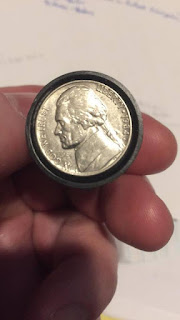 I need to build up 4 more missile launcher marines for the combat squads and buy another “metal” heavy bolter marine for a support unit.

I’ll need to proxy 1 plasma gun for a melta-gun that goes in the assault squad and 2 multi-meltas for the support units instead of 2 more missile launchers.

A little more gluing and some quick painting to match up the new guys to my original Archangels and I’ll be good to go!
Posted by Maleagant at 10:42 AM