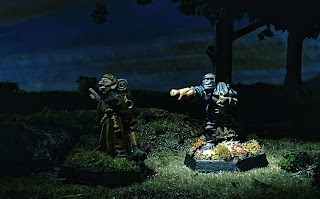 Image courtesy of Stuff of Legends
Thanks to an online pal, I was able to get some wonderful Citadel pre slotta Minis from 1981-82. Most of them were FA Adventurers, some I could only identify as C series prelotta minis. Either way, it was a wonderful gift and I chose the Ninja Assassin with sword (v1) as my first mini to paint up. On the catalog page he is on the left, second from the bottom. 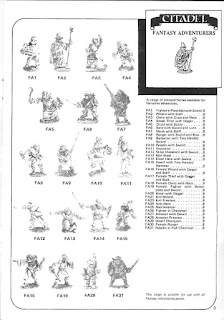 First thing to do with the preslotta minis is to build up a base with green stuff and some sand and rocks. Even after having done it so many times, it's still really enjoyable for me to do. 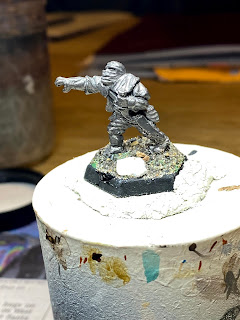 I decided to paint the entire mini black (except for the skintones), which seemed reasonable to me; after all a ninja would probably not have any shiny, warhammery things on him. To create some variety, I used some blues with black wash, and some blueish washes over beige highlights, which still resulted in a  black look, but a bit different from each other. 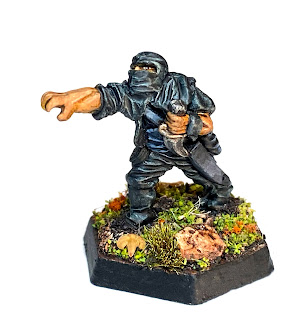 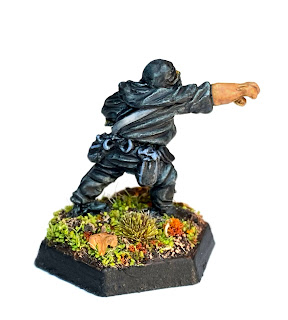 The range was sculpted by the Perry twins in the early, early 80's so it's old - this mini showed it's age - gouges in the arm and one of the feet and the outstretched hand didn't have the right finger design or was damaged, hard to tell - after all this little guy is 40 years old.

There is a another ninja in the FA range which is identified as V2 on the Lost Minis Wiki page. It will be fun to find the second one as well and have them displayed together. 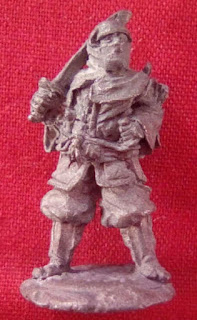 If you want to learn more about this wonderful range, check out the rest of the minis here