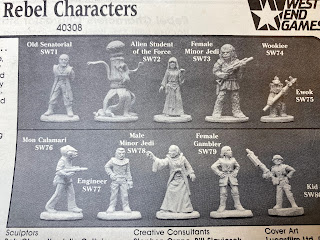 My wife and many of my friends really really love Star Wars. Me, growing up in the Netherlands, didn't really have a bond with that franchise, but here, where I live in California, there's a deep rooted love for that world and it's heroes and villains. So when I was able to pickup a box of old minis, I took the plunge and figured it would be fun to paint up for my wife.

Here's the first one, the Wookiee. It's not Chewbacca, but a random Wookiee, with clothes on no less. When I was looking around for a halfway decent paint job, I could not find any online. So I figured by painting one up in my own style, maybe I will inspire someone to also give it a go. 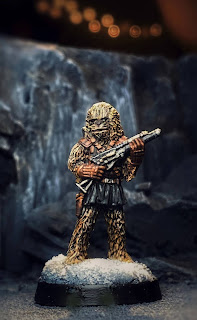 I looked up some details on how to paint the weapons. The Wookiee's main gun is a standard blaster, the one on his back I could not identify with certainty, I am sure there will be someone out there who knows! 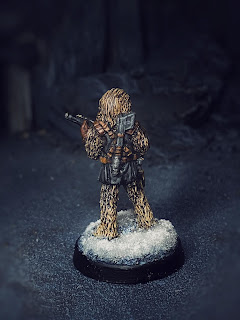 West End Games created an Star Wars RPG in 1987 and had Grenadier sculpt and cast a bunch of minis for it. In the first version they came in nice boxes, one of which I have. 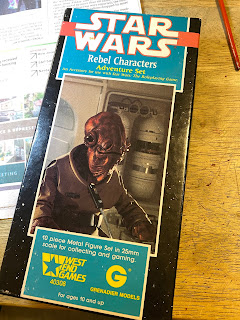 Later the minis were packaged in blisters. The box has ten minis in it, plus a little leaflet. One side shows the mins and a brief description, the other side shows the game stat sheet for all the models. Pretty cool! 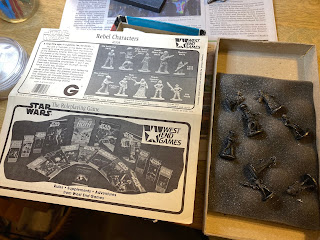 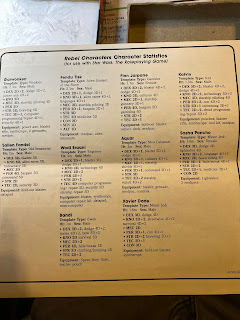 The minis are 25mm, so a little smaller than our usual heroic style models, but with this Wookiee you can't really tell, because they are so big any way. The humans are quite a bit smaller. 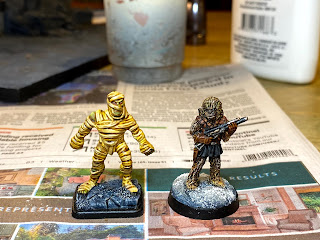 The minis are not amazing pieces of art like some of our beloved Citadel models from that era. But they have a lot of sentimental value and are definitely good enough to paint them up and put them out somewhere. They are pretty inexpensive if you are going to hunt for them, especially if you don't care about the packaging!
In 2014 starwars.com wrote a great article about the history of this rule set and the minis, definitely give it a read here
Hope this inspires!
SC Mike