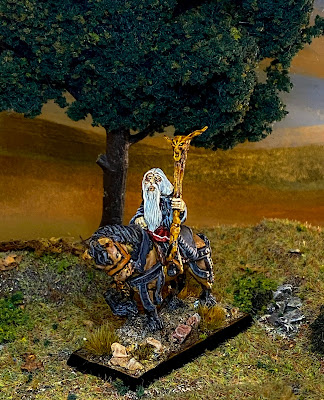 I decided to build a warband for Mordheim with exclusively oldhammer miniatures. Using a list from Broheim, I came up with a blind grey wizard who is being sent into Mordheim with a small group of warriors, thieves and a student. I will be painted the warband in muted colors with lots of browns and grey, which suits the Mordheim esthetic. 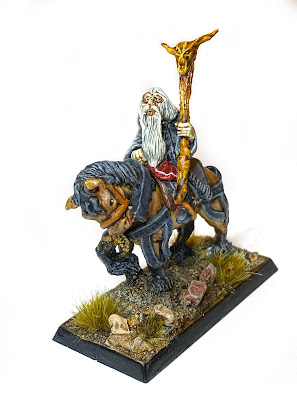 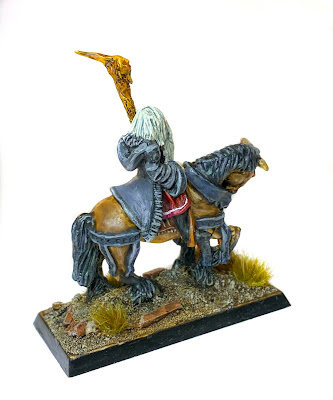 The wizard is a model from Heritage, a company that was founded in the early seventies and lasted into the 80's. From 1980-82 they created a line called Dungeon Dwellers, minis to be used with RPG's. The original designation of this blister was Dungeon Dwellers #1216 and came with both the mounted version and the one on foot. Although supposed to be a 25mm, the mounted version looks great as a heroic scale mini. 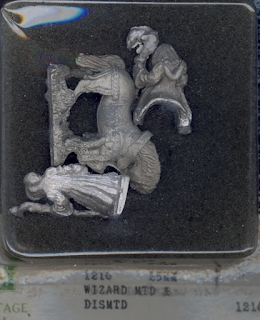 The original one had a huge staff head, which to me looks way over the top. I received my version without the head of the staff, so I created a new one out of a wood elf bit and some green stuff, I think it looks way better. 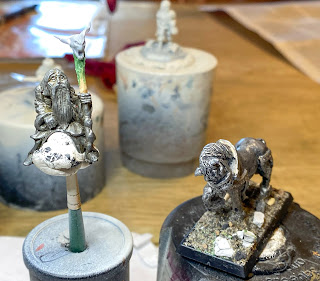 The sculpt is not perfect - it's clearly a miniature from the early days of lead casting for RPG's. Detail is shoddy, and there are no really smooth transitions in the cloth or on the face. But still, I love this little guy- his demeanor look great and I knew right away I wanted to do something with him.

Here's a shot of the whole warband with all the minis that still need doing-  see anyone you know?