More Progress With My Guard Headswap 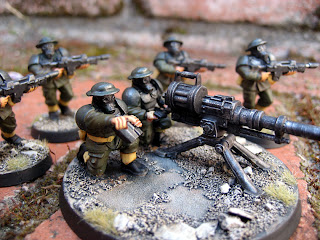 You may have seen my previous post about the gas mask / helmet head swap for my Imperial Guard unit.
I have decided to call them the Ardwick 23rd.
The name is a nod to Dave Taylor and his Genswick 33rd, I really liked the dish shaped helmets, Ardwick is a suburb of Manchester ( the first industrial city ) I figured it would have a lot of pollution, to justify the masks, and it is in England, I used the WWII British uniform as inspiration, and the 23 is from my street address.

I have finished 5 Guardsmen and a heavy weapons team which can swap the gun out between the auto cannon, las cannon, and heavy bolter. The bald spots ( without basing sand ) on the base are where the bits for the other gun options sit, but it seems to give the look of old pavement. 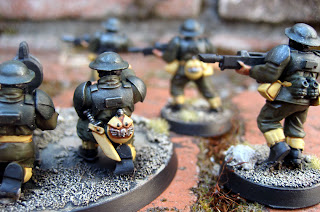 Besides the pointer crewman, all the pouches bags and canteens are molded on to the standing figures. 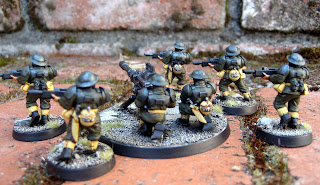 I plan on adding some backpacks, so I ordered a bunch from MaxMini and I have been thinking of using some gas mask heads without helmets ( Tox heads ) also from MaxMini and robed flagelants for penal legion troops or perhaps psykers.
John
Posted by SC John at 10:18 AM