While making a trip through the local dollar store discount shop, I came upon a few little buildings that I thought I might be able to do something with.

I have been playing Warhammer Fantasy a lot more now and also just started with some WWII British Airborne for Bolt Action. I liked the idea of a few buildings that could be used as either 28mm Fantasy or 28mm WWII European. I have seen other holiday decor buildings like this but it seems like they are too goofy looking or they have too much Christmas themed nonsense on them, but these were just one dollar each, and for a three dollar investment, I figured I would give it a go, so I picked three that had doors that looked like a 28mm person could walk through, (most were smaller closer to 1/72 or 20mm )

My goal is to make some buildings that I can use for 28mm WWII and Fantasy with very little real work.

The two main things to deal with were getting rid of the Christmas decor, and dealing with the snow piles on the roofs. If you want to have a Christmas battle and a snowy table these would be easy to use as is, but I want them to be non snowy and non holiday specific, so I set out to deface them.

you can click on the pics to make them really big. 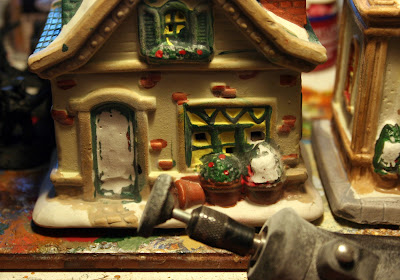 Using my trusty Dremel rotary tool with a grinding stone, I went after the houses and like the Grinch I removed all the ribbons wreaths and other nonsense.

Next up the snow piles on the roofs, rather than spending 6 hours grinding and then resculpting all the roofs, I decided to go with thatched roofing , this works for WWII Europe and Fantasy, so I went to the craft store and bought a chunk of fake fur. I have heard that in smaller scale you can use terry towel but this was only three dollars and was enough to do a bunch of roofs. Make sure you get black, or you will have a hard time painting it 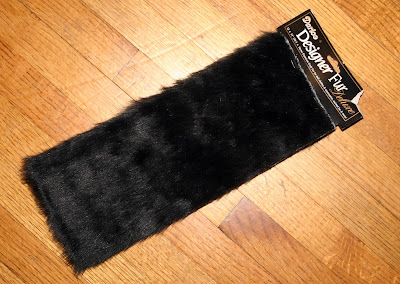 With scissors I cut sections and glued them to the roof of the buildings, so they looked like they had Beetles wigs on 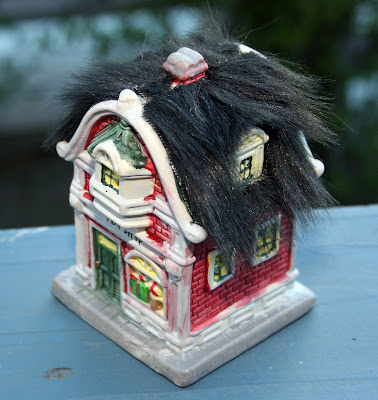 then a nice heavy black primer coat, the spray primer will stick the fur fibers and mat them down nicely for the final paint, and its easy to trim the fur when it dries 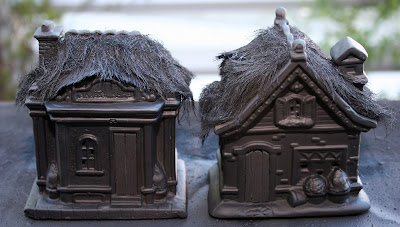 You can see where I made new doors out of craft sticks and coffee stir sticks, I decided to keep the ridge on the roof as a Dutch gable, but you could also cover it with fur. 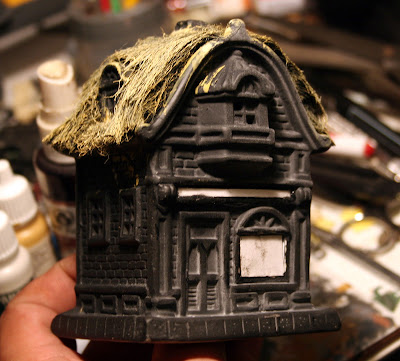 Here is one with the paint going on the thatching, you can also see where I filled the window and toy store sign with cardstock

Finally just paint them up as you like, I also used a dullcote sealer.

and here are the three houses, I added some flocking to the plants, and a 28mm WWII british Para and a Warhammer Fantasy skeleton for scale.

All in all I am happy with them, only 6 bucks spent and some paint, they are kind of small, but I think I will keep them together and have them be a row of little shops.