I have finished up my Ogre Army and feeling elated about it . Pondering the next project to start, I was contemplating Chaos Warriors, but in the end I have settled on a Goblin Army, either in the snow OR in a fairy like forest with lots of mushrooms!

So anyone out there who is interested in a trade or sell. I am looking for unbuilt, built, primed but preferably not painted goblins, spiders whatever you have.

For trade I have lots of Tau, lots of Chaos Warriors, Ogres and some random models. I also have Sergeant Centurius in case someone is looking for that rare model.

Ogres: a short story about Flamegrot, a human slave

If you have followed progress on my budding Ogre Army, you might know I didn't include any gnoblars, instead using humans in that army spot. The idea behind it was reasonable to me, since the Ogres seem like ravaging, nomadic hordes, who would scoop up plenty of human slaves along the way. The slave were put to work until they we worn out, and then In the Pot, or left for the sabretusks. Not a pretty picture.

But there was one human, who was revered by my Ogres, and they named him Flamegrot. This human, whose name was Hendrik, was blessed with fire powers and used them for the good of the mountain community he was part of. He had no idea of warhammer world politics and was solely focused on doing his part as a healer, shaman and leader in his birth village, high on the mountain plateau.
Then the Ogres razed the town and Hendrik got corralled with the other survivors, waiting for their doom. At that point Hendrik showed his fire powers, channeling energy through his hands and create immense heat until the green, white flames shot up in the sky. His people were comforted, since Hendrik had used his skills for good things all their lives, but the Ogres were aghast.
Full of fear for the little person and his fire hands, they instantly killed every villager and gave Hendrik a little hut, showing him some respect but keeping him locked up. They fed him some tidbits and kept him alive. Eventually they allowed him to walk around their camp, but with a heavy ball and chain. The Ogres, fearful but mindful of their little prisoner, named him Flamegrot. Years passed and Hendrik forgot his real name, his history as a respected villager and he became mentally unstable, due to hardship, limited diet and emotional distress endured during the aftermath of battle for his village. He became the Ogres Firebelly, unstable, empty and lonely but very powerful. 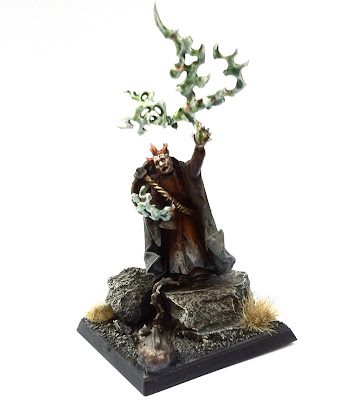 I have always had a love hate relationship with the firebelly model from GW. I always thought his body looked too athletic and I didn't like the naked look. I couldn't find a suitable replacement from a different company. And then the 40 dollar price tag has helped me get over myself and buy it. So I started thinking about the little human, the extremely superstitious Ogres and my bitz box. Here's the build:
Body is from a empire wizard, with the removal of the side ribbons
arms are from the fleeing human of the giant kit
head is from the human in giant hand in the giant kit
flames are from the skaven Doombell kit

I raised the model a bit, so he would be on the same height as his Ogre compadres.

Hope this inspires to think outside the box once in a while!

Email ThisBlogThis!Share to TwitterShare to FacebookShare to Pinterest
Labels: Ogres 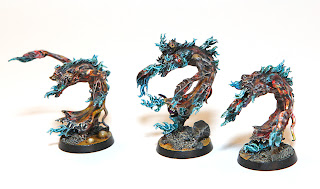 For a brief spell I was sidetracked into the new Daemons codex and had thoughts of allying them with my traitor guard or chaos marines. I bought three flamers and painted them up like so. But the I looked at the pricing of the new model kits and realized, there is no way I can justify spending so much money. So with these three it will stay - i will probably give these away. Fun to paint though! 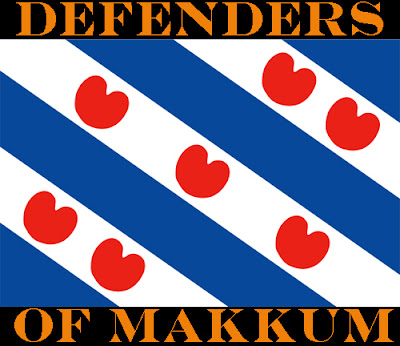 It's been over a year when I started an ambitious Empire Project: The Defenders of Makkum. Not having the stamina to finish projects in one go AND being distracted by other army projects, I hadn't touched the stuff for a long time. Then I finally finished up the gun battery that I was envisioning. Here's a shot:

I painted the guys in Nuln black, altough the rest of the army is brightly painted. The bases are from Dragon Forge and cut down to two's where needed.

Here's a link to the rest of the army

Email ThisBlogThis!Share to TwitterShare to FacebookShare to Pinterest
Labels: Empire

Update on the ongoing projects: Ogres, Daemons and Empire!

This coming week I will throw some posts on since I was finally able to photograph a bunch of models. I have been working non stop on the different armies and the results have been fun. This first post will deal with my budding Ogre Army, which I had neglected for quite some time and recently found inspiration to start working on again.

Here is the army as it stands now:

The Giant has not been finished yet and I one of the Iron Guts isn't done. Everything else looks peachy.

Here's my latest purchase: an Iron Blaster. It's a beast to paint and it took me ages, but it's a good model to work on. I restrained myself by dividing the model up into many different parts and stick with those parts only. 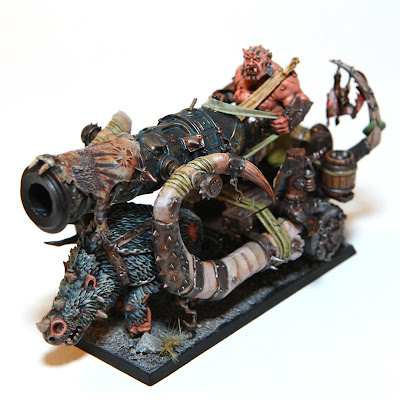 There are loads of objects to paint on the back end...they take forever but it is a varied assortment.. 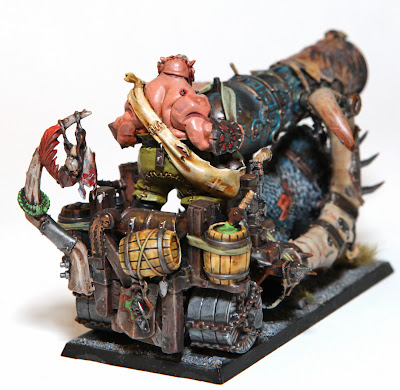 Below you can see the band that the Ogre holds the gun with. That part comes into two halves with the seam right on the front where the little black thingie peeks out -greenstuff is required to not end up with a seam. 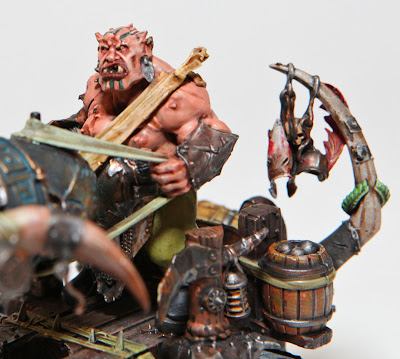 I decided against the tusks - I like the animal better with four nostrils, not just two.. 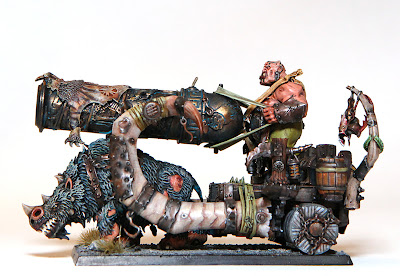 The last week and a half I have been working on finishing a Iron Gut unit that I had started a year ago.
I specifically liked working on the Irongut with Magic Banner and lookout knoblar which is in the front middle: 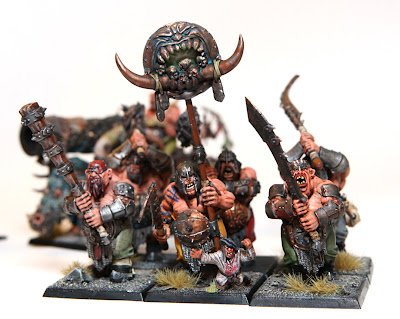 My Ogre Army doesn't have any gnoblars, instead it has human slaves. So the lookout knoblar was made from the fleeing human out of the Giant kit. The poor sod is attached by some nasty contraption hooked into his back: 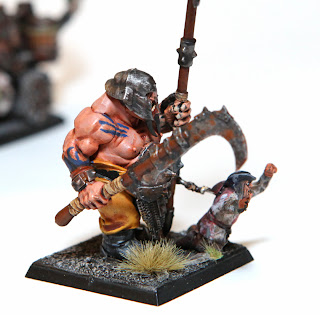 I already have had fun bringing some of those slaves onto the bases: here are my counts as Mournfang... 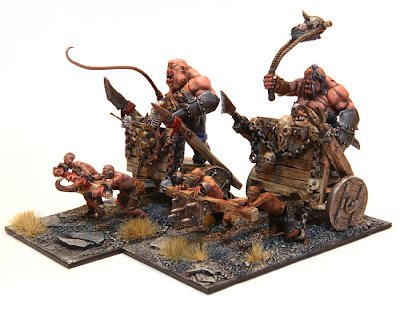 and the Lead belchers

This coming monday I will play a 500 pt game with them, which will hopefully be the start of a sort-of-escalation series ending up with a still to buy Thundertusk!

Here's a link to all the Ogre articles I have done so far:
Ogres on SCWH