O.k. I know it's been a year since one of us posted something, but here you go.

I've been eagerly anticipating the new Age of Sigmar Summer Campaign (kicks off July 14th) and I have been frantically modeling and painting up my Stormcast Eternals force. I just finished up painting my first 1000pts. (going by the soon to be released Generals Handbook) 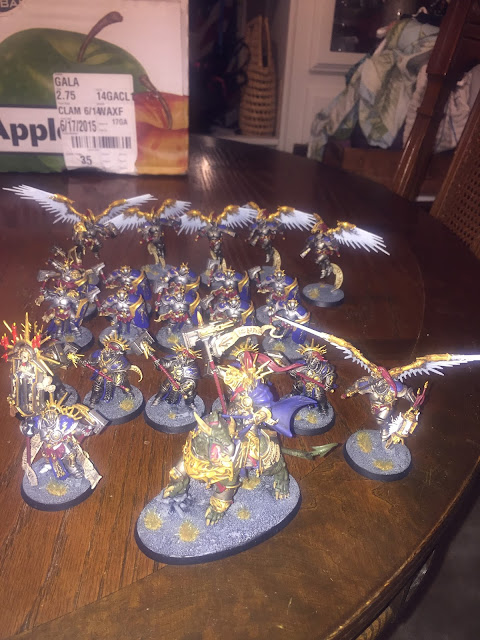 But I've got a few simple tricks to easily convert some models so you don't have to shell out tons of hard-earned dough.

The first and most obvious tip is to buy the AoS starter box if you're interested in playing either Stormcast or Chaos. You can find them online for around $80 at the moment and if you have a friend who's interested in going in on it with you, perfect! $40 will get you a 900 point Stormcast army...shell out a bit more for a 100 point hero and there's a nice even 1000 point "Vanguard" force. I added a Knight Azyros for my 1000 point list.

I played in a small local tournament (and incredibly ended up winng it!) that offered lots of AoS prize support. As a prize I got a box of Paladins. This kit is amazing as it contains enough extra bits to kit out of convert tons of other models. Retail is normally around $58, but honestly, for the extra bits you get and the amount of money you'll save by converting, makes this kit totally worth it. 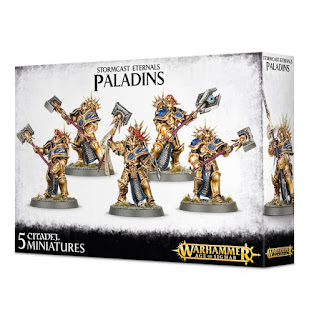 I chose to build most of mine as Protectors ( with glaives). This freed up tons of hammers (Retributors) and axes (Decimators). I spent some time snooping around eBay and scored a few more Retributors from the starter box. I snipped off the hammer heads to make quick and easy Decimators by gluing on the spare axe head. 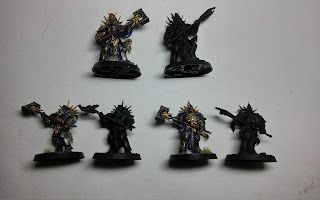 Original starter box Retributors on the left, Decimator conversions on the right...simple!

Next, I scored several Celestant on Dracoth (Vandus Hammerhand) models from the starter set. If you're cheap like me and don't mind several of the same model in a unit, then this will save you loads. I also bought a 4 pack of Prosecutor shields, also from eBay.

I decided convert two celestant models to Extremis Concussors and two to Extremis Desolators using spare heads, hammers and axe head bits from the Paladin box plus the shields. 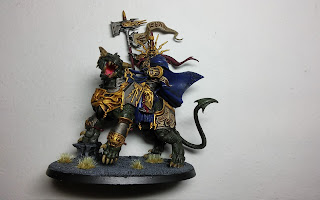 This conversion requires a bit more clipping and filling in gaps with greenstuff, but the conversions are simple and quite easy. 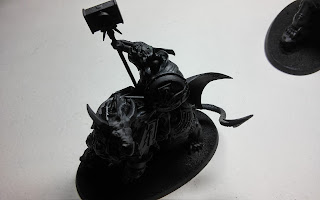 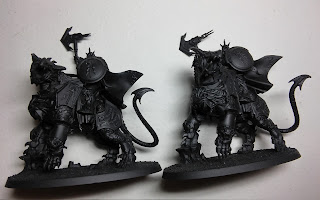 Cutting off the head and axe are easy, but you'll have to fill in the gap on the shoulder pad. 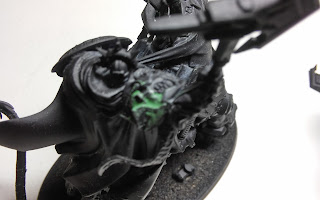 Next up was to convert a starter box prosecutor prime into a Knight Azyros. Originally, I used a spare 40k Grey Knights sword in place of the hammer in the right hand and a lantern bit from an old Empire or Mordheim sprue for the left. It looked ok, but I ended up getting the 4 pack Warhammer Quest expansion and building the Knight Venator which has the sword and lantern to make an Azyros. I swapped out the grey knight sword and empire lantern for the proper bitz and this is what I ended up with. 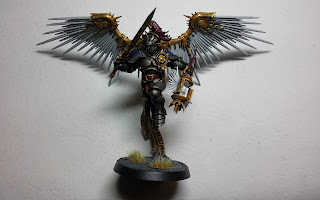 Again, not bad, and it saves a bit of money.
I have a few more conversion ideas, such as converting a Retributor to a Knight Vexilor using the spare banners that I cut off from the Celestant on Dracoth models as well as converting a Lord Relictor into a Lord Celestant on foot.

I hope that I've helped to inspire you!!!
Ciao for now,
SC Glenn

Posted by Maleagant at 9:45 PM No comments: